Yakuza 0 takes the series back to its roots in 1980s Japan against a backdrop of glitzy nightlife and sleazy gangster politics. As this is a prequel, there’s no need to worry about catching up with the game’s complex plotlines and inter-family drama before you head in.

You’ll get to experience the origin stories of two of the series’ recurring protagonists: low-ranking Yakuza member Kazuma Kiryu, and the exiled Majima Goro. The game’s chapters alternate in focus between the pair as they become entangled in a sinister gangland power struggle. The multiple factions that make up the underbelly of Japan’s crime organisations are disputing who has ownership of the last ‘empty lot’ in the seedy district of Kamurocho – a fictionalised interpretation of Tokyo’s red light district, Kabukicho.

A plot centered on a prime piece of real estate doesn’t sound like it could be captivating but that’s where Yakuza 0 will surprise you. It wastes no time in absorbing you in its drama, and if its opening minutes aren’t enough to convince you, we’ve chosen six components of the game that make Yakuza 0 worth playing.

The Yakuza series is far from a Grand Theft Auto clone. Beyond it being steeped in Japanese culture – which is enough to set it apart from its genre peers alone – it has a theatrical soap opera of a plot, an arcade brawler combat system, and enough minigames to warrant a spin-off party game.

What should be a disjointed game feels far from it as Yakuza 0 blends all its separate elements into a surprisingly cohesive package. Part of how it’s able to do this is embracing its own ridiculousness. In any one hour of game time, you could be dancing away at a disco, traversing a dungeon-esque skyscraper roundhousing crooks, or relaxing at your favourite ramen joint after a long night.

To look at it, Yakuza 0 should feel like a game from a decade ago – when Shenmue was the pinnacle of the medium – especially with its manual save system (through phone boxes dotted around the districts). But developer Sega has mastered the art of embracing the videogame format, and all the freedom that brings, which is what sets Yakuza 0 apart from its contemporaries. 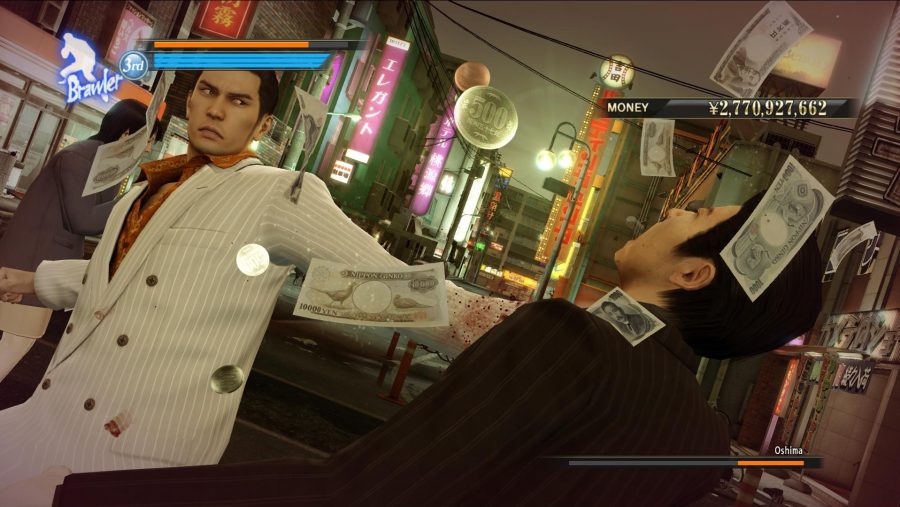 It’s made very clear as soon as you jump into the hardened body of Kiryu that Kamurocho is not a safe place to navigate. Wander down a few of the bustling streets and you’ll soon find groups of delinquents and low-life crooks looking for a scrap. Getting from A to B without ruffling a few of those pristine haircuts is a difficult task.

Fortunately, Yakuza 0’s brutal, head-whacking combat will give you a taste for bruising your knuckles. Kiryu and Goro have multiple fighting styles at their disposal: Kiryu’s ‘Beast’ style has him knocking down thugs with any nearby object, while Goro’s ‘Slugger’ and ‘Breaker’ styles have him utilise baseball bats and the art of breakdancing to lay the smack down.

The variety and flashiness of Yakuza 0’s street fighting gives the game’s high frequency of encounters a free pass. It’s difficult to get bored of literally hitting the cash out of overconfident gangsters with a children’s bicycle. If you fall in love with brawling on the streets of Tokyo then it’s also worth visiting one of the many bars scattered across the cities, as there are certain abilities you can only unlock once you’re inebriated.

GET LOST IN THE CITY

Finding alternative routes through the city to avoid combat encounters – should you ever tire of them – is an exercise in exploration rather than frustration.

Yakuza 0’s fictionalised versions of Tokyo and Osaka are brimming with detail, every nook and cranny revealing a quirky character in need of assistance, a building hiding your new favourite minigame, or a bar that marks the beginning of your next night of debauchery.

Touring these meticulously designed areas is a real treat. And their memorable designs will mean you’ll soon learn all the back alleys as you go, helping you get into your gangster role as you start navigating the city’s darker streets as confident as blood runs through veins. You may even start forgetting about the minimap altogether. 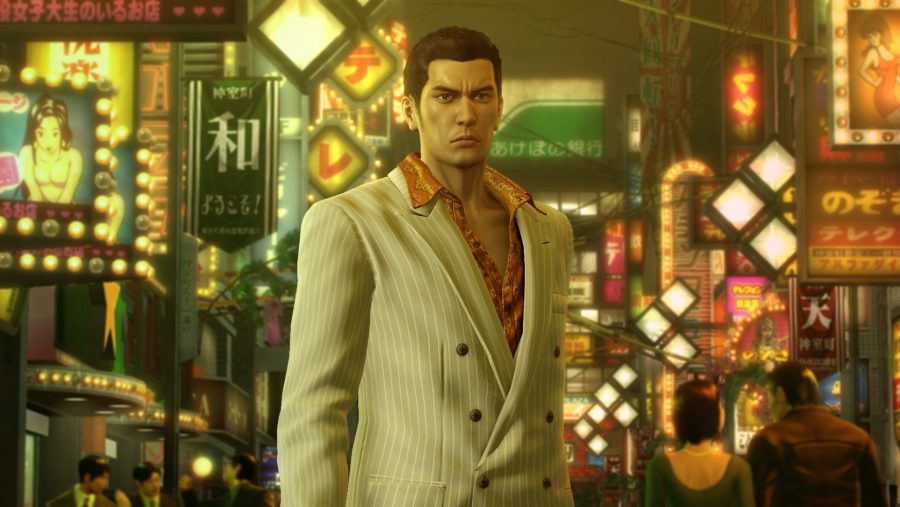 There’s no rush to complete tasks in Yakuza 0. Taking the time to stop and admire the sights can be the perfect respite between the bombastic main story beats. And, honestly, is there a better and more relaxing pastime than eating?

Eating and drinking play an important part in Yakuza 0 and reflect how central food is in Japanese culture. Stumbling into a tiny takoyaki store or rundown whiskey bar marks one of the few moments of reprieve from the onslaught you can find. Bars and eateries become a sanctuary from the harsh city streets, restoring your health and providing a chance to reflect between the violence.

There’s a whole range of adventures waiting to be found in Yakuza 0, and broadening your culinary horizons is absolutely one that is worth your time.

Yakuza’s minigames should need no introduction. After wandering around Tokyo for a while the place will start to feel like one big arcade for you to play in. An evening of belting out ballads at karaoke and dancing to ‘80s pop hits will make your fingers sore with their frantic rhythm-based challenge. And the UFO catcher will test the limits of your patience as you try desperately to acquire the tiny adorable axolotl with the top hat and moustache.

Sega has also included full-length versions of its arcade classics for you to play, including Out Run and Fantasy Land, so prepare to feel terribly old as you play the games you enjoyed for hours as a child, except now served to you as mere minigames.

one of the prizes is an actual chicken

Other notable minigames are fishing, baseball, and bowling, in which one of the prizes is an actual chicken named Nugget – who can also help in running your real-estate empire. If you’re looking for something a little spicier, Yakuza 0 has you covered still, with pastimes ranging from women’s wrestling, watching smutty VHS tapes, and working for a saucy telephone hotline. 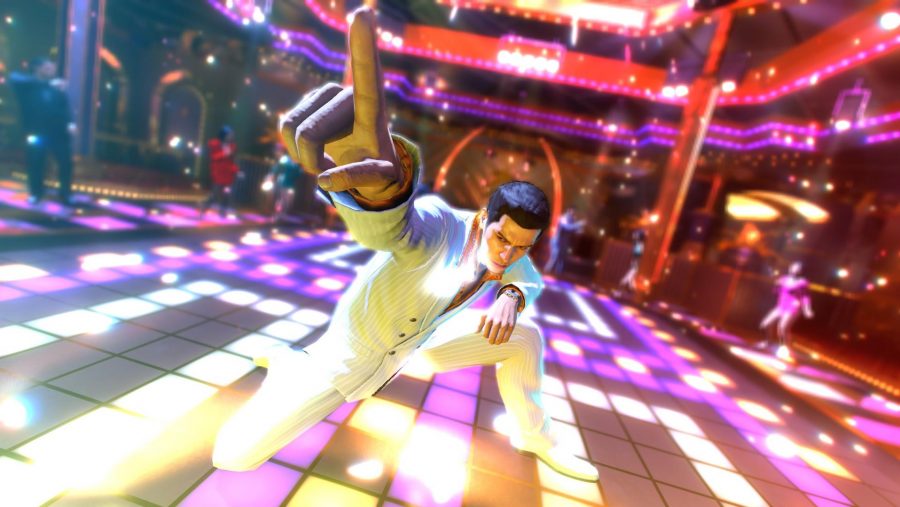 Minigames aren’t Yakuza 0’s only form of eccentricity as the game’s side-quests will quickly prove, arguably being the highlight of the entire game. The humorous counterpart to the serious main plotline, Yakuza 0’s side activities and substories act as a viewpoint into the colourful cast of characters that roam the streets of Tokyo.

The substories provide great rewards and help build friendships with some of the more notable background characters. It’s where the game shows most of its personality and really builds out its protagonists. It can seem like everyone in Tokyo is in need of a favour but you’ll be more than happy to oblige.

It’s easy to overlook one of the best activities Yakuza 0 has to offer – the hostess club management minigame. After being exiled from the Yakuza, Goro becomes the manager of a rundown cabaret club, where he protects young women who have been marked for assassination. Not only does this provide fascinating character growth for Majima, it’s also a surprisingly detailed strategy experience, complete with its own storyline.

Managing the cabaret club involves recruiting hostesses that excel in different personality traits or talents. Some may be the life of the party, encouraging customers to spend their cash, while others can be witty and become a hit with individual patrons.

Thankfully, the hostesses aren’t treated like disposable humans, who act purely for your benefit. In order to build up the club’s reputation, you’ll need to spend time with each woman, talking to them and helping them build their skills. This reveals their aspirations and quirks and makes each of them feel human – a rarity, especially in games of this size and breadth.