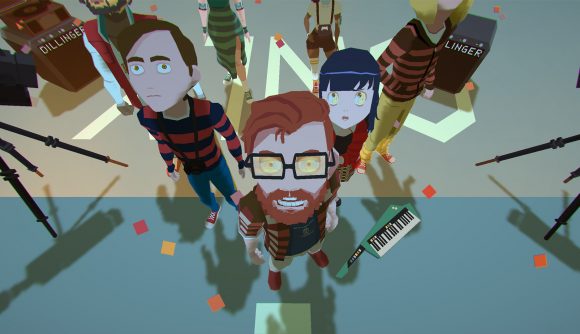 We were pretty excited about YIIK: A Postmodern RPG back when it first appeared on our radar back in 2015. Back then, JRPG-style games weren’t a commonplace thing on PCs, but YIIK’s sense of time and place is still striking today.

It’s set firmly in the 1990s, when alt-rock and flannel were all the rage, but the nature of reality here is plastic, and YIIK (pronounced Y-two-K) travels through time, space, and mental dimensions freely as you follow the adventures of Alex Eggleston, a college dropout who’s trying to figure out how to be a functioning human adult.

In that sense, it’s reminiscent of Night in the Woods, but rather than a platforming adventure game, YIIK uses JPRG mechanics cribbed from games like Final Fantasy VII and Ni No Kuni, with some of the stylistic panache of Persona thrown in for good measure.

YIIK’s been in development since 2013, and its long development is the result of a tragic personal loss that its creators, brothers Andrew and Brian Allanson, experienced just as they were getting in gear as a games studio. After the untimely death of their mother, the pair decided to suspend development on YIIK.

As Variety explains in an in-depth feature from last year, the brothers returned to YIIK after grieving and found that the game wasn’t what they wanted to make any more – they had changed, and what they’d made in YIIK felt wrong. So they rewrote and rebuilt a significant amount of what they’d developed to that point.

Now, they have a release date – YIIK is coming out on Steam January 17. Here’s the launch trailer:


This new, revitalized version of YIIK is less cynical and more “humanistic,” the brothers say. It’s certainly got its own sense of humor, but it also wears its inspirations on its sleeve. And the soundtrack features pieces by Toby Fox (of Undertale fame), Hiroki Kikuta (Secret of Mana), and Garoad (VA-11 Hall-A).
.

What’s next: Our list of exciting upcoming PC games

There’s a lot going on with YIIK, and I’m excited to see how it all jells together in the end. I think anyone who spent their formative years in the 1990s, like I did, will want to check this one out.