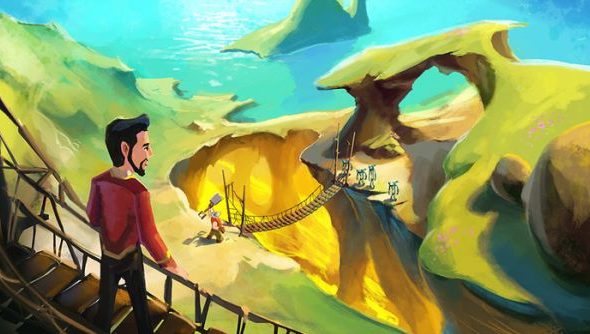 Yogscast and Winterkewl Games have ceased development on their open-world post-Minecraft sandbox game, Yogventures. But according to Yogscast co-founder Lewis Brindley, that’s “actually a good thing”.

“Although we’re under no obligation to do anything, instead we’re going to do our best to make this right, and make you really glad you backed the project!”, he said.

There will be no refunds for Kickstarter backers. Instead, they’ll receive a Steam Early Access key for a different open-world survival game, from another developer.

“As you may have heard, Winterkewl Games have stopped work on Yogventures – but this is actually a good thing,” wrote Brindley in an email to Yogventures’ 13,647 backers. “The project was proving too ambitious and difficult for them to complete with their six-man team.

“While this was Winterkewl’s project, we put a lot of time, energy and effort into trying to help them realise their dream. Since we heard the news, we’ve been working hard behind the scenes to make sure that you still get awesome stuff and cool experiences.”

The initial consolation prize is an Early Access key for TUG, a survival game in development at Nerd Kingdom. Yogscast signed a deal to become partners and collaborators on TUG last week.

“In many ways TUG is the game we were hoping Winterkewl would create,” said Brindley. “It has huge potential for the future. We’ve been playing the Early Access version on Steam and you’ll soon be able to see us playing the game on Yogscast channels.”

“Their insights and experience working with modders and map makers will be invaluable, and its going to be a lot of fun making some content for their community as well,” he wrote. “Hmm… how many ways COULD we craft a viking helmet or diggy diggy hole tools?”

What Yogscast aren’t offering to backers are refunds for their pledges, which ranged from $15 to $10,000. Were any of them yours?