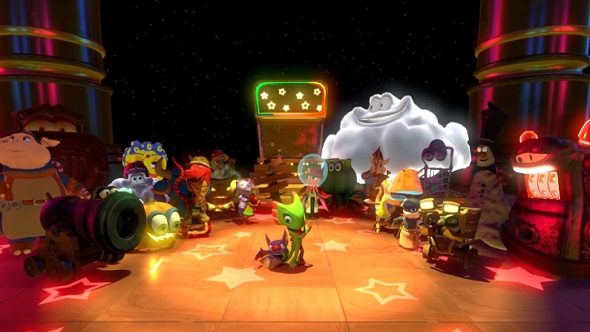 Coming back with a hot new mix after almost 20 years away from the microphone, Playtonic Games have finally released the eagerly anticipated Yooka Laylee rap. Landing somewhere in ‘so bad it’s good’ territory, this rap is something that should maybe have been left in the ‘90s.

Have a read of our early impressions of Yooka-Laylee, ahead of its release.

The YK Rap was actually Yooka-Laylee’s £1,100,000 stretch goal with Playtonic promising to draft in Grant Kirkhope, composer of behind the original DK Rap, to craft a new beat for this modern day collect-a-thon.

By Kirkhope’s own admission, he is “clueless when it comes to that style of music”, so he drafted in Playtonic staff to write and lay out the crisp bars you will hear in the full game. I doubt anyone’s going to be challenging Playtonic Games to a rap battle anytime soon.

For long time Rare fans or people who have the curse of knowing the DK Rap in its entirety, there’s a couple of references and jokes to both the original rap and older Rare titles. A particular mention of ‘nuts and bolts’ may send a few old-school Rare fans into a frothing rage. Personally, nothing can beat the lyrical genius of the DK Rap, but this new song is a cool little reference to one of the major influences on Yooka-Laylee.

You’ll get to experience the rap in all its glory on April 11, when Yooka-Laylee launches on Steam. I expect the full Playtonic mixtape to drop sometime this summer.