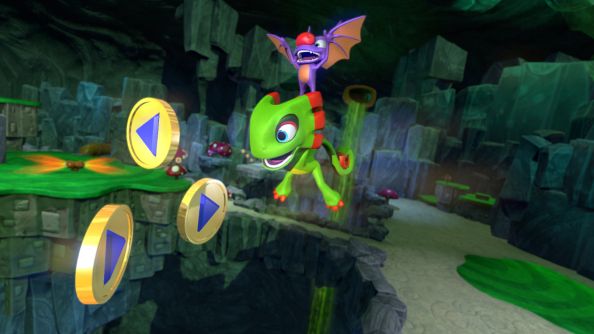 Yooka-Laylee is a game in the mould of the this-and-that 3D platformers that ruled the ‘90s: Banjo-Kazooie; Jak and Daxter; Ratchet & Clank; Assault and Battery. You know the sort. It’s the work of the Rare alumni at Playtonic, and if its pre-E3 trailer is anything to go by, is shaping up nicely – but has been pushed back from October to early next year in the name of polish.

Try our sandbox games picks for the best in undirected action.

Playtonic say they made the “difficult” decision after “a lot of soul searching”.

“While we felt confident we could ship the game in October as originally planned, the team has decided that it would like to add a few extra months’ polish to our schedule,” says MD and creative director Gavin Price. “Ultimately, this will allow us to release a better game to the thousands of fans who’ve supported us throughout development.

“We’re sure some will be disappointed by the prospect of a few extra months’ wait, however the Playtonic team is confident that we’ve made the right decision for the game and that you’ll be pleased with the results when the game arrives early next year.”

We’re off to see Yooka-Laylee at E3, and will report back on how it currently plays. Here’s hoping it’s every bit as colourful and freeform as it appears on YouTube.