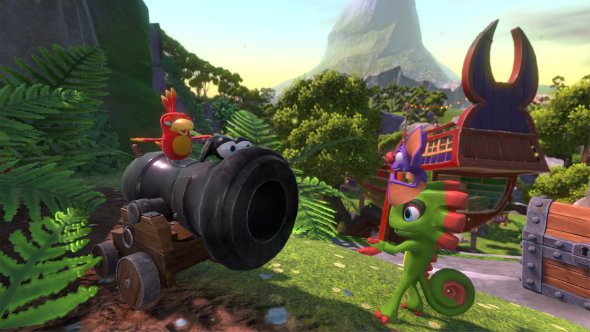 Being a PC gamer, it’s understandable if you missed some of the Nintendo 64 classics, particularly its brilliant 3D platformers. Among them was Rare’s Banjo-Kazooie, a 3D platformer heavily inspired by Super Mario 64. Banjo-Kazooie put you in control of two anthropomorphic animals: a brown honey bear called Banjo and a red-crested breegull named Kazooie.

Yooka-Laylee isn’t out until 2017, but there’s plenty in our upcoming PC games list coming before then.

The team at Playtonic – made up almost entirely of ex-Rare developers – are now looking to Banjo-Kazooie for inspiration with Yooka-Laylee, a modern take on the genre so enamoured with talking animals. In the Unity-built platformer you control a chameleon called Yooka and the bat who lives on his head, Laylee, as they try and save the world’s literature from a nefarious corporation.

They do this by delving into these works of fiction and collecting Paiges, restoring the tomes to their former glory. I visited publisher Team-17’s office in Wakefield to have an hour with the pre-alpha build and got the chance to delve into one of these worlds, called the Tribalstack Tropics, myself. The Tribalstack Tropics are exactly like the image the name conjures in your mind: all lush greenery and azure skies. A dry riverbed coils through the environment, jungle ruins jut out of the ground, and floating isles hang in the distance.

I begin my playthrough at the bottom of a ramp and have to use the symbiotic duo’s roll move to get up the steep rise. Triggering the ability makes Yooka to roll into a ball as Laylee stands atop and runs, causing them to gain speed as the bat’s little legs struggle to keep pace. At the top I’m met with an open expanse dotted with enemies to tail whip, quills to collect and Paiges to be found. 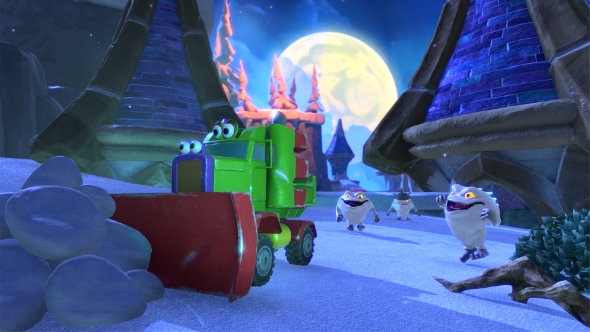 Paiges are your main objective, allowing you to progress and, if you wish, build out existing levels, causing new islands and areas to pop into the empty sky beyond the level’s current bounds. The further you expand the world, the more challenging it becomes.

Even without expansion, the Tribalstack Tropics are impressively large. There’s a huge mountain to clamber up, bounding across rotating platforms and shifting ledges to make your way to the top. At its peak, a cloud named Nimbus sits above a pool of water. Gobbling up elementally-charged berries nearby allows you to spit them at him and cause the cloud to take on different properties: spit a goblet of water at him and the pool will fill, spilling off the mountain and filling up the dry riverbed below; breathe ice into the cloud and the water will freeze, allowing you to skate across.

Manipulating Nimbus alters the level, letting you explore in different ways. Making the river flow allows you to dive in and be swept along by its current, seeing what secrets it holds. Freeze it over and you take part in a slippery race across a river of ice. The Tribalstack Tropics is more like a hub than a traditional level, twisting, layered and with treasures stashed away in its folds.

Most Paiges are found by completing tasks for the well-written NPCs. During my playthrough, I save a skeleton from being cooked alive, help a mad-scientist with body-transforming experiments and take part in a Donkey Kong-style minecart section. Fans of Rare’s previous works will be happy to know that the studio’s wacky naming conventions remain: a trouser-wearing snake called Trowser is a highlight. That minecart? He’s called Kartos, and one of the characters quipps to ask if he’s the God of Ore. If you follow games journalists on Twitter, you might realise this is an industry in-joke about a certain publication that misspelt the God of War protagonist’s name on the front cover of an issue: “Kartos is back!”, it bellowed. The Yooka-Laylee writer is an ex games journalist, so it’s likely a funny little nod. 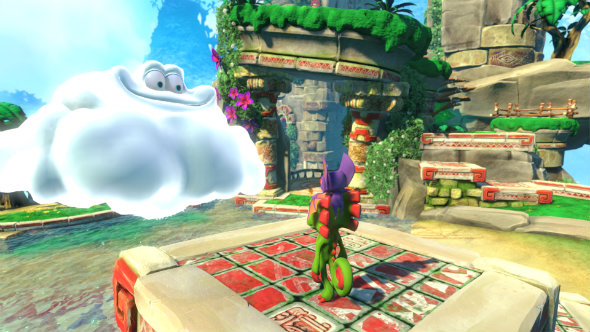 Of course, the world and its characters wouldn’t mean much if the game wasn’t fun to control, but luckily it feels fantastic. It’s snappy, responsive and the animations really sell each movement, making it easy to judge distances whether you’re whipping enemies with your tail, rolling up a ramp or clearing gaps with a floundering glide.

For the purposes of the preview, I was granted some late game abilities and dropped in an early level, so it’s difficult to grasp the game’s pacing and how it doles out new moves. From what I tried though, it feels like, if they nail that, Playtonic could have something special on their hands with Yooka-Laylee.

Outside of the brilliant Grow Home, there’s nothing much like this on PC. Following on from its Kickstarter success – of which it became the most successful UK Kickstarter game in history – critical and commercial success could well see others follow suit, especially when they see that this sort of quality is attainable with a team of around 20 people, albeit massively experienced ones. The 3D platformer has never really felt at home on PC, but Yooka-Laylee could finally bring some of that Nintendo-style magic onto our desktops in March next year.