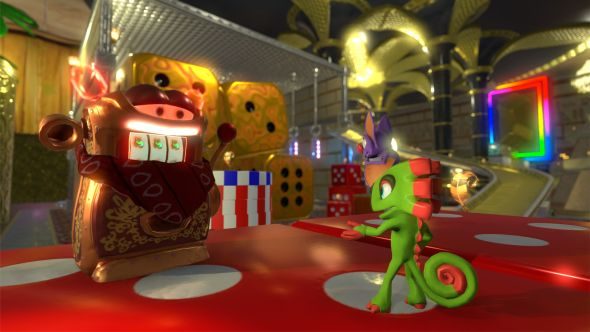 Doing its very best impression of a 90s platformer, Yooka-Laylee has revealed one of its worlds – a giant, slightly corrupt casino. Wouldn’t be a platformer without it and the trailer is above. Playtonic have also revealed their planned release date of April 11, only six months after their initial Kickstarter plan of October this year.

Unrelated to our home but of note is that Playtonic have also confirmed the cancellation of a WiiU version of the game, citing unforeseen technical issues – presumably, the console wasn’t powerful enough – and moved it to be a Switch title for Nintendo’s launch next year. Anyone who pledged for a WiiU version invited to move their pledge to another version – be it Switch or another.

If you pre-order any version of the game you’ll get access to Toybox, the tech-demo version of their platforming mechanics. It’s an open-world sandbox with no content from the actual game inside, so don’t worry about spoiling yourself if you do go for it. That is available right now.