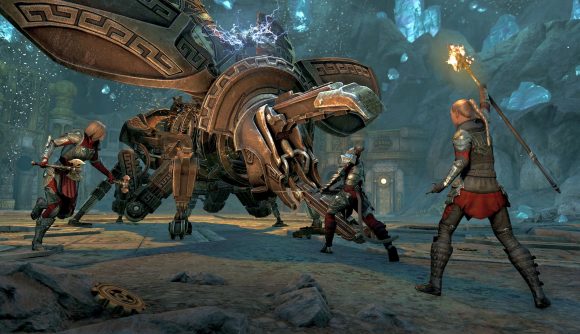 Looks like ZeniMax Online, developer of The Elder Scrolls Online, has a brand-new triple-A project in store. Senior game designer Quentin Cobb has announced that he’s just joined the company and that, alongside forming a new ZeniMax “satellite studio” with some other devs, he’s working on a “new, unannounced triple-A IP”.

Cobb, who has previously worked at The Last of Us and Uncharted developer Naughty Dog, as well as at Sony and Daybreak Game Company, has announced on Twitter: “I am happy to announce that I’ve joined ZeniMax Online as a sr. designer working with my good friend [creative director] Ben Jones, on a new, unannounced triple-A IP! I’m thrilled this is finally happening and wanted to share a few details”.

In subsequent posts Cobb explains that, alongside devs Alex Sulman, John Bautista, Chris Kovach, and TJ Madigan, he’s helped form “the basis of a new satellite studio for Zenimax Online here in San Diego”. He later adds: “This is easily the most excited I’ve ever been to work on a project since I joined the industry back in 2009”.

There’s no information beyond this on exactly what this mystery project might be, much less when we can expect to hear more about it.

Along with some talented folks @RamblingAlex @JustCallMeBau @chriskov @tj_madigan we've formed the basis of a new satellite studio for Zenimax Online here in San Diego. 2/4

Cobb additionally highlights that the studio has got a whole bunch of positions it’s hiring for across its San Diego studio and other locations, with the company saying on its website that these roles are for “both The Elder Scrolls Online and multiple unannounced projects”. However, a peek at the role descriptions doesn’t seem to offer any clues.

I want to thank everyone at Zenimax for the incredibly warm welcome as I’m thrilled to join this team! This is easily the most excited I’ve ever been to work on a project since I joined the industry back in 2009. 3/4

Looks like we’ll just have to wait and see what’s in store from ZeniMax for the time being. While you wait, be sure to check out our lists of the best new PC games you can dive into right now, and upcoming PC games to keep a weather eye out for.