Zeno Clash was a game all about punching six foot tall birds in their idiot beaks. It was a game in which you would uppercut them in their cloacas before grabbing a man made out of sausage rolls and repeatedly plunging your knee into what, only through extensive deduction, you would call his face. It was a game about breaking the jaw of a six-boobed rat woman before piledriving her off a cliff in front of her friends, and then grabbing a big stick and chasing her friends around as well. Zeno Clash 2 is pretty much the same deal, but with added co-op. It’s maybe just slightly weirder too, if only because of the man who collects feet and throws them at you.

Zeno Clash 2 is a first person brawler set in a maddeningly surreal Dada meets Miyazaki fantasy world, refreshingly distant from all things Tolkien and consistently surprising in its dreamlike setting. The world is Zenozoic, a sort of prehistoric tribal society spanning deserts, swamps, forests and rolling green plains and hosting dozens of barely literate, bipedal, humanoidish species. There’s no external narrative, no voice of reason to join you in pointing at the silly bird-people and going “bwahhh?”, which makes the whore ordeal feel fantastic, feverish and delirious. Imagine the first time you saw an orc, but happening every time you turn a corner.

Where the original was a linear, level-based trek from point to point, Zeno Clash 2 is a more open-ended affair with bits to explore and all manner of ridiculous crap to pick up. The world is split into thematic hub-chunks with multiple exits and routes leading to other areas. This freedom to roam allows for multiple, optional objectives too: you can wander about recruiting new allies to fight alongside you or pursue the main plot, which involves helping your dadmum, FatherMother, face trial for kidnapping a whole crowd of babies. FatherMother, in case you’re wondering, resembles a cross between the Big Friendly Giant and a turkey. 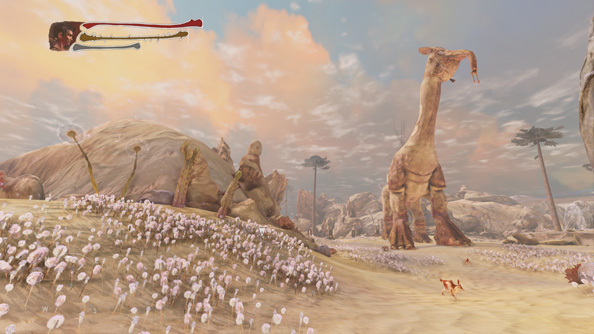 Whichever objectives you follow, you’ll be persistently followed and ambushed by groups of insane people who you must punch and kick to death. Some of people you fight are unique, like the man who collects feet and hangs them from a shelf attached to his shoulders. A few seem to follow you around the world, repeatedly cropping up and spoiling for a rematch. The combat in Zeno Clash 2 is brutally kinetic, which is great, because hitting people is pretty much your only means of interaction with the world. Your left and right fists are mapped to the left and right mouse buttons, while stringing together punches unlocks combos and more complex means of smacking people. A pitch-perfect mix of meat-slapping, bone-cracking sounds and expressive enemy faces creates a sickeningly physical sense of brawling.

The sequel adds some new moves, most notably a reverse kick, which sends a boot into the guts of anybody stupid enough to stroll up behind you mid-fight. The reverse kick, which you’re prompted to do whenever anyone’s behind you, is a smidge overpowered. I hoofed a boss character off a cliff just by turning my back on the guy, which probably isn’t what the designers had in mind. In normal use cases, the kick is effective crowd control. You tend to fight groups of enemies at once, forcing you to move around the area and stay out of their collective reach, before ducking in a pummeling an individual foe. The backwards kick gives you some reassurance that you’re not being circled around. Some enemies carry guns too, which you can steal, though they’re weak, slow and more effective as a melee tool. Fists are the soup of the day at this fighty buffet. 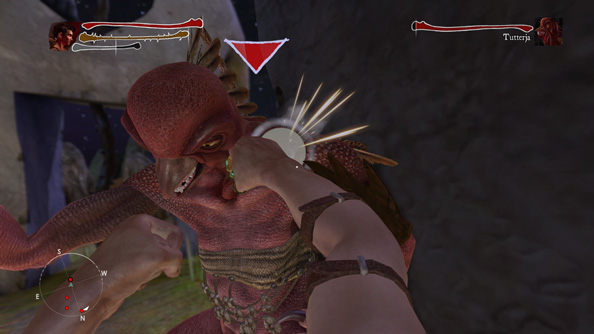 As you progress through the game, enemies become more technical fighters. Blocking becomes necessary, as do some of the more basic fighting combos. Different enemy types require different approaches, heavy fighters such as elephants can be softened up with a warhammer while flighty, smaller enemies often have to be countered before you can land a punch. The problem is, combos are hard, even during the tutorial, in which you’re pitted against an entirely motionless dummy. The inputs make no logical sense, so must be memorised by rote, and there aren’t enough of them that you could button mash your way to achieving some sort of fancy punching result. You can practice, of course, but when regular punches do the job there’s little reason to explore the fiddly combos, especially as the game’s default, auto lock-on feature is so easily confused by multiple enemies.

There are also some odd weapons you’ll discover and keep hold of as you play. One links enemies together, so that damage to one is also applied to the other. Another, the wrist-mounted Sun-Moon Cannon, can be pointed at the sun or moon and, when triggered, sets off a line of small explosives between the celestial body and wherever you’re standing, which is precisely as weird and unintuitive as that sounds. That weapon at least draws attention to the game’s lovely day-night cycles, which frame some of Zenozoic’s stunning landscapes with strikingly beautiful light shafts and crisp, moonlit nights. 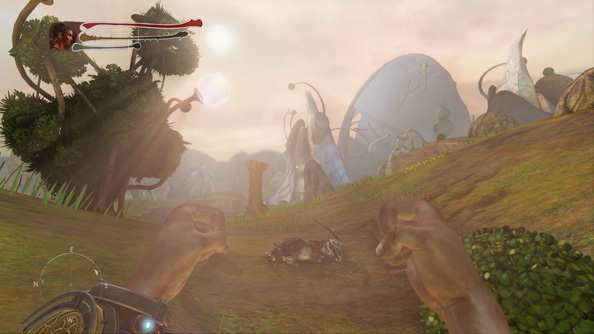 Zeno Clash 2 is strange, a return to the genuinely original artistic expression of the first game, but one that struggles to build on it. The more open world is a clear improvement, Zenozoic has room to breathe now, but the clunky new weapons are at odds with the purity of the melee combat. Finding new allies is a fun distraction and a clever use of the newfound space, but they’re next to useless in fights as they soak up only a little damage before they poof away into smoke to recover. Co-op doesn’t introduce any real new combat options or surprises, unless you count joining another player’s game and finding yourself flung forwards in the plot as a surprise.

Despite the floundering additions, Zeno Clash 2 is resolutely enjoyable at its core. While the fighting becomes as routine as you allow it to be, the game shines brightest when doing what it does best, lifting its skirt and showing you the unbridled, artful madness of its world, and letting you thump a big crow in the face. This game is nothing if not unique when it comes to abusing birds.