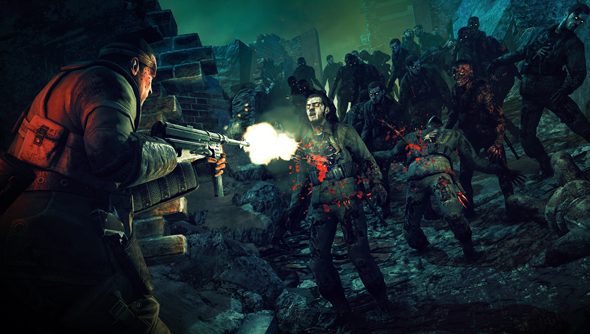 Zombie Army Trilogy is a trilogy of games aaaaall about a zombie army. Whose zombie army? Why Hitler’s zombie army, of course. We’re talkin’ ’bout Hitler’s army of Nazi zombies that he summoned up from the dirt using his occult powers in order to take over all of Europe, that one time.

I’ve been playing the thing, and here is what I think about it.

The Nazi Zombie Army games haven’t wavered much in terms of what they offer, sticking fairly rigidly to a proven formula of four-player co-operative shooting in the third person amid a horde of shambling undead soldiers.

It’s trashy and brilliantly pulpy schlock-horror, not taking itself too seriously but adhering to some strong co-op shooter fundaments: huge crowds of enemies with eminently watermelon-like heads, a massive armoury of World War Two era weaponry, an array of explosive devices and a little number that pops up to say how many zombies you got with a single grenade. 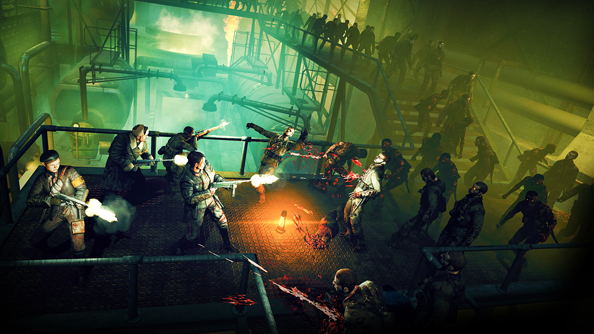 You’ll find five missions per game, which maths fans should already have realised totals 15 missions across the trilogy. The latest set of five include a ruined Berlin, a ruined forest, a ruined church, a ruined sort of trainyard, just lots of ruins really. The zombie army ruined pretty much everything. It’s like they don’t even care.

You’ll get about 30 to 40 minutes out of each mission, as each one carves a path through several different distinct areas punctuated by moments of calm in which you take shelter at survivor camps or in reinforced panic rooms and bomb shelters. Some comparisons can be drawn with Left 4 Dead, but only for so long: Zombie Army Trilogy is less tactical and more tally-ho. Teammates can be incapacitated and revived, but you’ll spend less time chucking medpacks and pills about than straightforwardly murderising the hordes. 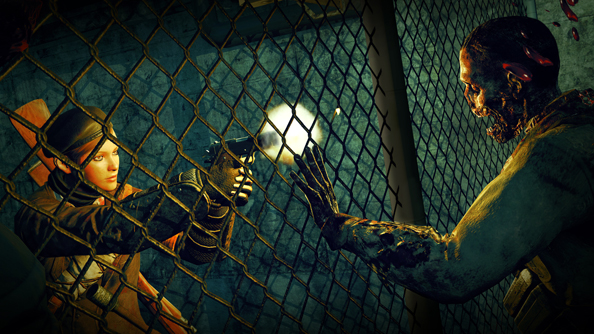 In the Berlin map we played, all four zombie-hunters started out atop a safehouse rooftop, before descending through the building and out into the infested streets. On my way down the stairs I accidentally kicked a survivor in the stomach, which caused the previously friendly remnants of human civilisation to open fire on us, and for us in turn to unapologetically wipe out the safe house. Friendly fire is a thing.

Out in Berlin, we’d find mannequins hooked up to PA systems that could be activated to draw dozens of zombies towards them. Once we had them all nibbling on plastic limbs we could detonate explosives to eradicate entire flocks of undead at once. Similarly, unexploded bombs and artillery can be found dotted about the levels, flashing red and waiting to be hit by your stray bullets. Electric fences can be activated to fry zombies too, and once you run out of ways to kill your opponents using the environment, you can lay tripwires and mines yourself, covering off corridors and defending your exposed quarters.

There’s rather a lot of depth to what on the surface seems like a balls out, run and gun shooter. The pace of the Berlin mission is tempered by a few instances of having to defend a heavily fortified encampment from a number of zombie waves: in one case we found ourselves atop a pillbox with two mounted guns, surrounded by four or five different paths from which zombies would routinely spill. Communication and preparation were critical in preventing the undead from getting too near, and the one player who strayed too far from safety found himself irretrievably incapacitated, the big idiot. 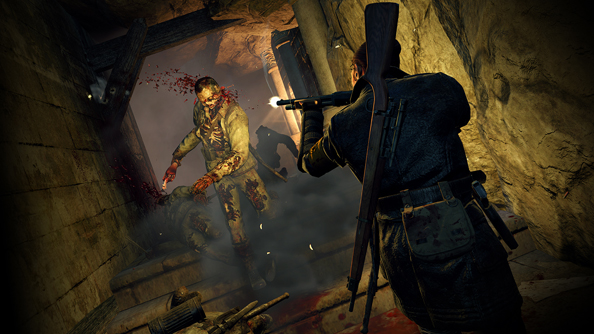 We were also thrown into a more traditional and all new horde game mode, which plops four players into a small and enclosed map before throwing wave after wave of enemies at them. Zombie Army Trilogy’s horde mode is easily the game’s most challenging, as it sprinkles each wave with increasingly powerful enemies. By wave three of the cliffside map we played, we were facing a pair of hulking Super Elite soldiers armed with heavy machine guns and vulnerable only to being shot in the head a good fifty or so times.

Nobody, as far as I could see, could survive wave three. Somebody nudged Rebellion in the elbow while they were drawing this difficulty curve.

Now that we’re three games deep however, there’ll surely be a generation of Zombie Army players who’ll welcome the ratcheted challenge of the third entry’s horde mode. For the less inititiated, Rebellion’s remastered backlog of zombie smiting is a generous wodge of the most enjoyable kind of schlock horror shooting on PC.