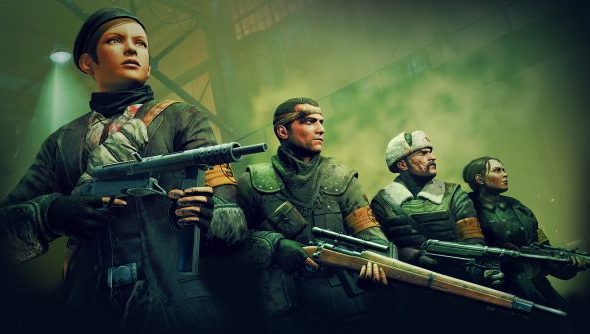 One of the first things Rebellion are doing this year is releasing a remastered Zombie Army Trilogy. Which is a bit odd, really, since there’ve only been two Nazi Zombie Army games to date.

As it turns out, the collection incorporates a brand new third installment in the series – another authentic campaign stretched across the irradiated, demon-plagued ruins of ‘40s Germany.

The Trilogy’s primarily for the benefit of PS4 and Xbox One players, who currently have to reach into the murky low-res world of last-gen to play Zombie Army games. But there’ll be a PC version on Steam.

The Trilogy will be available to pre-order today on Steam. Rebellion are also planning a PC-only discount for owners of the first two Nazi Zombie Army games, which they’ll conduct via Steam sometime before launch.

You’ll face off against a resurrected Hitler too, but we’ve all done that at least once before, haven’t we?

Rebellion haven’t parted with precise details about what’ll be remastered – other than to say that all three games will be in “bloody beautiful” 1080p. Have any of you rabble enjoyed a previous Zombie Army game in fewer pees?

Rebellion’s Aliens vs Predator returned to Steam this morning, after a short, unannounced break.