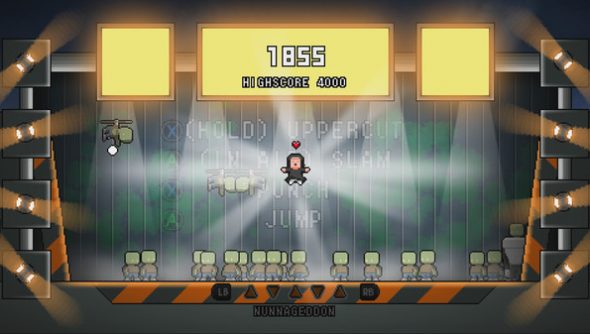 Think you’re good at games? You can prove it by having a crack at the 10 Second Ninja X demo – if enough people show the required skill, the game will launch at a fraction of the RRP.

Looking for more little studio goodness? Our list of the best indie games on PC is just for you.

If you’re skilled you can earn up to three stars in the 10 Second Ninja X demo’s levels, but you need to be fast like a, well, ninja.

For every star earned by players in the demo, publisher Curve wil drop the price of the full release by0.0008%.If 50,000 stars are collected by players worldwide prior to release, the game will be discounted by 40%.

“10 Second Ninja X may look like a straightforward action platformer,” says Dan Pearce from developer Four Circle Interactive, “but it’s so much more than that. Achieving three stars on any level is a challenge – so we wanted to reward those who gain stars in the demo by offering a real, financial reward. With 15 stars available in the demo, we only need 3334 players to demonstrate total mastery. We have every faith that the challenge will be met.”