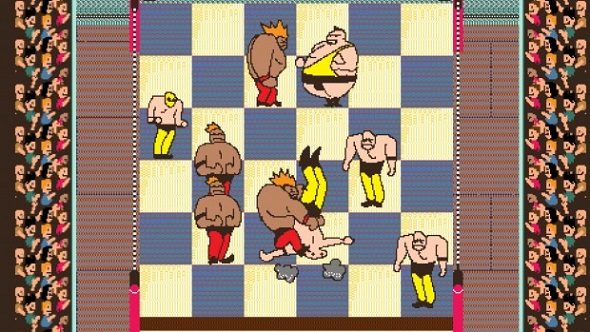 It started with a simple tweet last December from author Nate Crowley (aka @frogcroakley):

Intended as a flagrantly odd take on the trend of ‘one like equals’ threads popping up on his timeline, he only expected his tweet to get a modest number of likes. But – fittingly, for something authored by a man who launched his book-writing career off the back of taking a Twitter joke too far – the tweet quickly racked up hundreds of likes.

Want to know what the best real games are? Check our list of the best PC games.

Crowley, unprepared to back down, tumbled down a rabbit hole of ever more bizarre, whimsical, and hilarious game concepts, riffing on every genre under the sun in 140 characters or less. When the game titles alone are worth a glance – Regency Ogre Duels, anyone? Beastenders? How about Scouse Dracula? – who couldn’t help but like it?

By the time this Herculean (or rather, Sisyphean) undertaking concluded three months later, Crowley had conceived elevator pitches for 1,000 fictional games. “There would’ve been more,” he tells us. “But once it got past 1,000, I did publicly beg people to start unliking so we could it get it back down.” 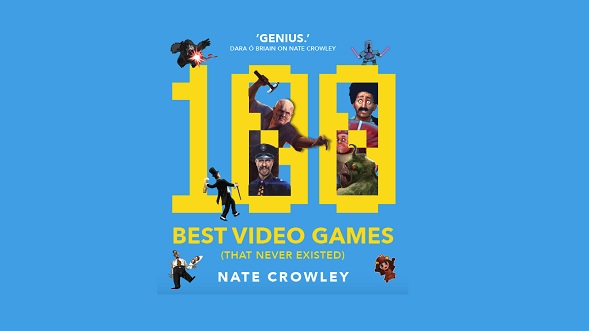 Now 100 of these ideas have been expanded upon for Crowley’s latest book, a beautiful retrospective compilation called 100 Best Video Games (That Never Existed). “Originally, it was going to be just the tweets printed out with pictures,” Crowley says. “But I thought, why make it that easy on myself? Let’s do a proper article for each one. I’ll be absolutely straightforward: it’s a book to read while you’re having a poo. Even so, I thought it would be fun to do something a bit broader, because some of the games felt like they belonged in the 80s, others felt like they were modern.”

Far from just a random list of ideas to chuckle over then, the games follow their own timeline, reading like an alternative gaming history imagined by Douglas Adams – particularly befitting of the author’s first-hand experience with ropey old British games and the quirks of the Britsoft bedroom coding era.

There are takes on subjects as broad as the early attempts of edutainment, the Atari crash, and not-as-far-fetched-as-they-should-be visions of VR and AR. Fueling Crowley’s talent for worldbuilding, you’ll also notice recurring fictional developers and studios reappear with their own narrative threads. 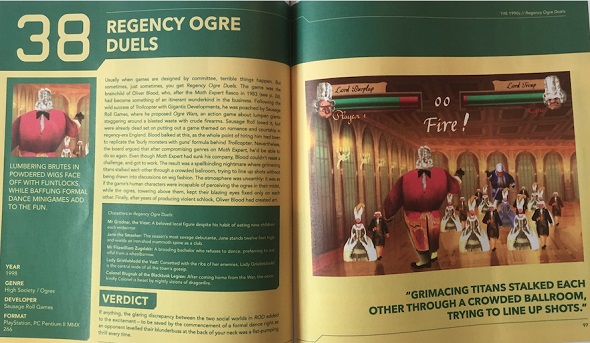 “I thought it’d be interesting to use this structure to gently satirise how different genres came into being,” he says. “It’s really odd how a lot of the big genre staples in games just come off the back of one successful game that got made 30 years ago. A side-scrolling beat’em up or a top-down strategy – there’s no reason that they should be fundamental cornerstones of games. But just because you have one smash hit that starts a genre, it’s easy to fill that mould. It’s quite arbitrary.”

Among these concepts, there are some inspired ideas for mechanics that might just as easily have been cooked up at a game jam. In fact, one of Crowley’s followers made a Pico-8 version of one of his fictional games: No Frog Left Behind, in which you rescue frogs from a polluted swamp.

Animals are a recurring theme in the book. Crowley is an animal lover, so it’s no surprise that they feature quite widely – and not just as a tool to farm, kill or dominate. He even turned his tweeting marathon into an opportunity to raise money for the Zoological Society of London’s conservation of the endangered mountain chicken frog – proceeds from the book will also go towards the cause.

“That’s the Winner Winner Chicken Dinner at the end of this story,” he quips. 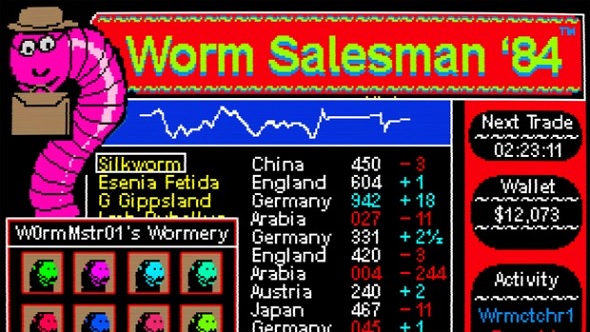 Another is boozing. One game casts the player as a drunken bushido warrior in first-person, another asks them to guide a champagne-addled aristocrat through a monster-filled labyrinth.

“Most characters in games are hyper competent,” Crowley explains. “So there’s something really funny to me about the idea of characters who are drastically intoxicated attempting to do normal game things.”

Despite his superhuman ability to conjure up so many ideas, Crowley is modest about the process. “I will have just racked my memory of every game I’ve played and ripped it off at some point,” he says “[And while] the idea is important, the majority of what makes a game really outstanding is simply the [developer’s] craftsmanship that’s gone into it.”

The book is on sale now – you can buy it directly from Rebellion’s publishing arm. To give you a taste, here are five of our favourite fictional PC games from the tome (edited for brevity): 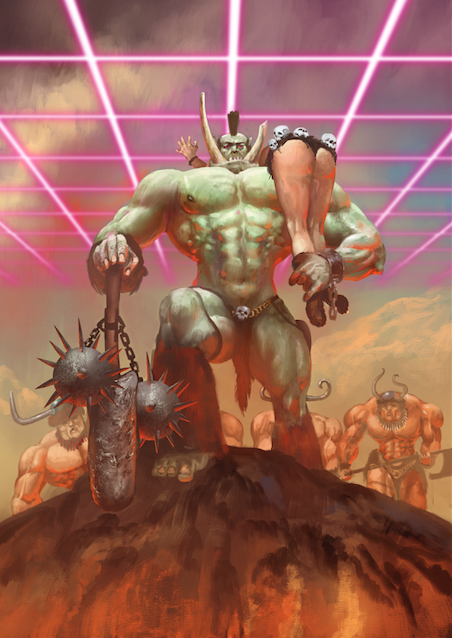 Fantasy text adventure that turns out to be about befriending an orc who can’t admit a fear of intimacy due to his nickname.

What the critics said: Despite box art and an opening that follows the clueless misogyny playbook to the letter, this is an inspired commentary on performative sexuality and fragile masculinity in high fantasy. 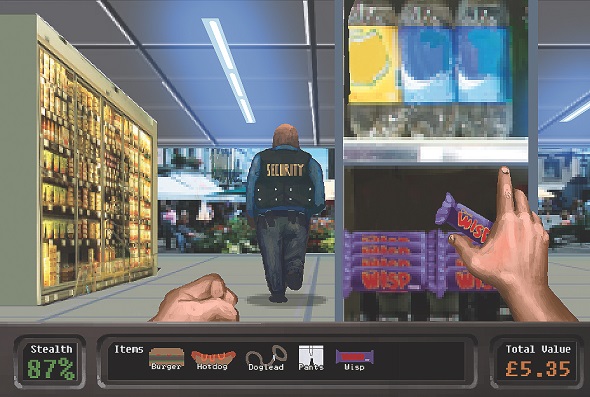 UK High Street Stealth: rob a Wispa from a newsagent with a bit of string, nick a dog lead from a pound shop, steal pants from M&S.

What the critics said: It says a lot that in a year of big budget shooters, 1997’s most exciting moment in gaming would be snatching four cans of dog food from under the nose of a Tesco security guard. 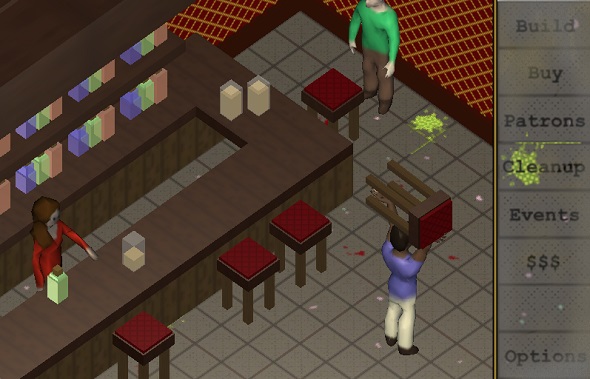 Sandbox game where you design a pub and patrons, then inject random events to cause a perfect storm of needless rage.

What the critics said: Brutally themed but oddly relaxing – there was considerable catharsis in seeing a disagreement over a spilled pint escalate into a 40-man bloodbath, arguably a more effective de-stressing tool than an actual pub. 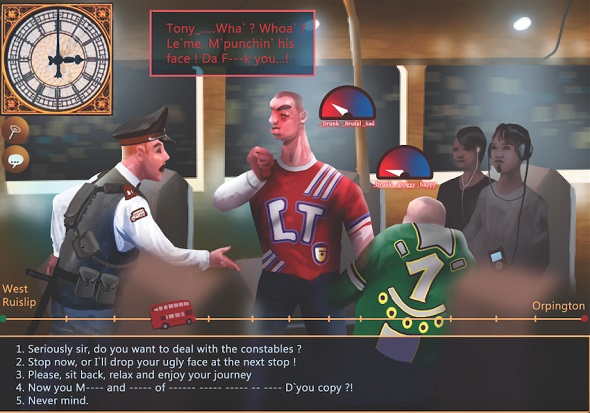 You play a lone wanderer attempting to cross London at midnight from West Ruislip all the way to Orpington, using every trick in the book to ward off peril on the lawless decks of the night buses.

What the critics said: Brutally realistic dialogue and a diamond-hard resource conservation metagame but random elements make every playthrough unique – while as few as one in ten ended with seeing dawn in Kent, it was worth it every time. 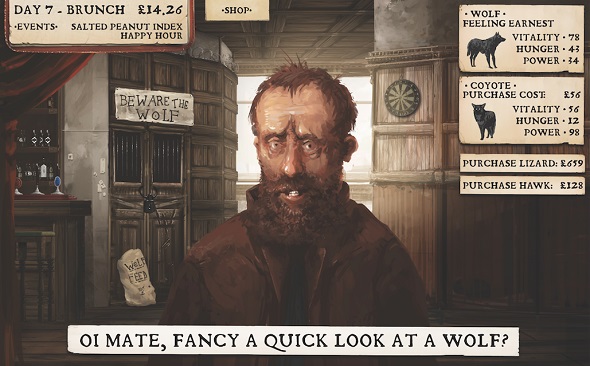 Management RPG: you have a wolf in the backroom of a dingy pub. Charge punters 50p to have a look at it so you can afford more animals.

What the critics said: With its subdued, painterly visuals and strangely poignant procedurally-generated dialogue, you’ll wonder if we aren’t all in a dismal pub, longing for a peek at the wild, no matter the cost.