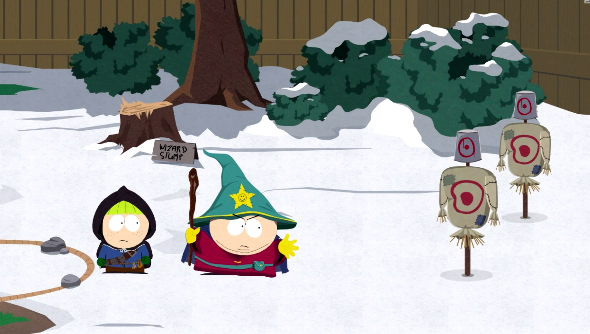 The hype train. It’s pulling in to your local station in 24 hours time when the VGX awards (what you probably know as the VGAs, but now with added X) air, showing lots of pretty trailers to get you all excited about the latest and greatest videogames. One of those trailers will be for South Park: The Stick of Truth. Hoorah! We finally get to see some more of Obsidian’s long-awaited sharp-yet-potty-mouthed RPG.

Ubisoft is concerned you won’t be able to wait another day to see that footage, though. So they’ve dished up 22 seconds of footage in the form of a trailer for the trailer. Should tide you over until your next dose of South Park, like giving a lollipop to a hyperactive toddler.

Did I say sharp? Well, I’m pretty sure the full world-premiere gameplay trailer will contain some of the satirical wit the show is well known for, as well as more fart jokes for good measure.

Your full look at South Park: The Stick of Truth will come at VGX on 7th December at 6pm/3pm PST. And after that, you’ll have to wait until March 4th until you can actually play the game. Hopefully you’ll survive the wait, but no doubt Ubisoft will provide you with more trailers and gameplay tidbits in the months leading up to release to keep you entertained/well hyped.