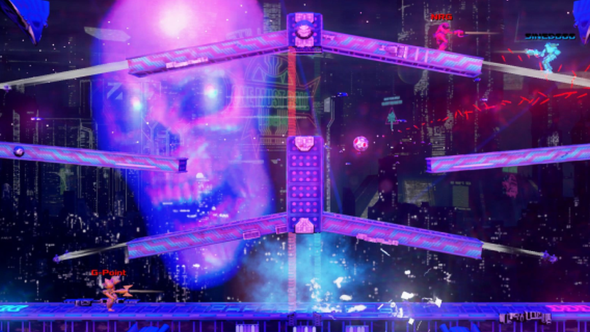 Games are, for the most part, meticulously planned. Design philosophy is subject to endless self-questioning at events like GDC, and what might seem like the most effortless mechanic got that way through exhaustive discussion and reworks. But Indomitus Games, fresh from the puzzle game In Verbis Virtus, wanted to think less.

“I felt the urge to do something with in-your-face, mindless action,” 2D artist Denis Gualtieri tells us. “Another attitude, something different. That was the start.”

The end result is 5 Minutes Rage – a murderous, short-form sports game and testament to the power of underthinking.

From shooter to sport

5 Minutes Rage is a ball sport now, but it began as a 2D deathmatch inspired by Vlambeer’s arcade shoot-‘em-up, Super Crate Box. The ball was merely an element of one of several “small, quick, and dirty prototypes” that Indomitus Games threw together in the early days of the project. They made extensive use of Unreal Engine 4’s visual scripting system, Blueprint, which makes coding accessible to artists like Gualtieri.

“You can experiment and approach it with simple ideas,” he says. “You can start very simple and then you can, when you learn more, make it more elaborate. It’s not frightening at the start.”

At public events, the developers would bring four or five nascent versions of 5 Minutes Rage for attendees to play. It was there that the ball sport, rather than the straightforward competitive shooter, won out. The finished version still includes a minigame dubbed Super Rage Box, however, in apparent tribute to that initial inspiration. 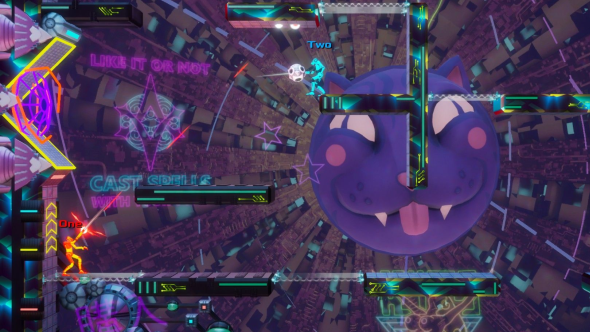 That title is as literal is they come: every match is played out in five minutes flat, and the crucial moments last seconds or less. For that reason, Indomitus have aimed to make every aspect of the game as immediate as possible. Part of that effort comes in the form of good networking – the studio’s biggest adjustment after a completely offline debut.

“I tried to make as much logic as possible on the client side,” programmer Mattia Ferrari says. “So the player feels impact as soon as they do something.”

The team have taken a similar approach to particle effects, which materialise near-instantly in-game rather than follow elaborate transitions.

“At the start I wanted the particles to last and be amazing and big,” Gualtieri explains. “Then it was a bit of a mess because everything was too chaotic. At a certain point we realised it was better to do particles that last 0.1 second or 0.2 maximum. It’s very fast, that was the trick in the end.” 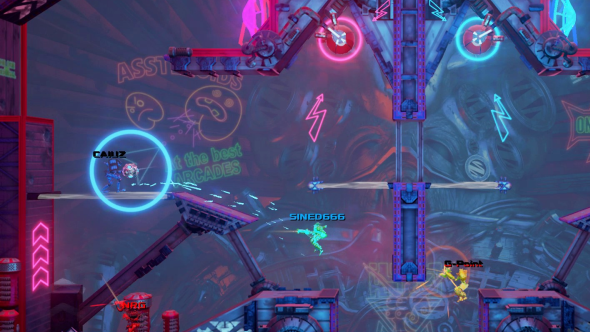 The common element shared by all of 5 Minutes Rage’s maps is a distinctive neon buzz. None of the signs quite read, ‘This game was inspired by the 1980s’, but they may as well. Gualtieri, however, was keen not to overthink the process but to tap into the indistinct memories of TV shows and movies he watched as a child.

“You can reach ‘80s style on purpose by studying it, but I felt that this was most interesting if it came out almost as an accident,” he says. “I think it is a bit more fresh and unpredictable that way. It was not a well-thought-out process – it was an accumulation of small adjustments.

Gualtieri drew from the heart, and gradually began to layer the results on top of each other. Ferrari acted as a filter for his ideas.

“The visual style is a bit cheesy, a bit punk, and I’m happy with it,” Gualtieri says. “My process is that I fight with things. I play with the materials until it feels good to me, and then I show Mattia. I have no clear path when I start things. I have a feeling and I’m very open to happy accidents.”

Happy accident has governed the development of 5 Minutes Rage. Its key ideas have come about through trial and error, and Indomitus have had the wisdom to pick the best and chuck the rest.

“We started with different ideas and we tried different things. In the end we polished all the things that were right and threw away many things that didn’t fit. It was a creative process and very fun.”

In this sponsored series, we’re looking at how game developers are taking advantage of Unreal Engine 4 to create a new generation of PC games. With thanks to Epic Games and Indomitus Games.