Streets of Rage, Battletoads, Golden Axe: all nearly three decades old. The golden age of the brawler may have scrolled sideways off the screen a long time ago, but Sobaka Studio are determined to see it roll around again, in the form of 9 Monkeys of Shaolin. Theirs is a simple game about knocking over an improbably large number of baddies until they stop getting up. But in making it they have faced off against modern and complex development difficulties.

Read more about the best co-op games on PC.

They call it cel-shading 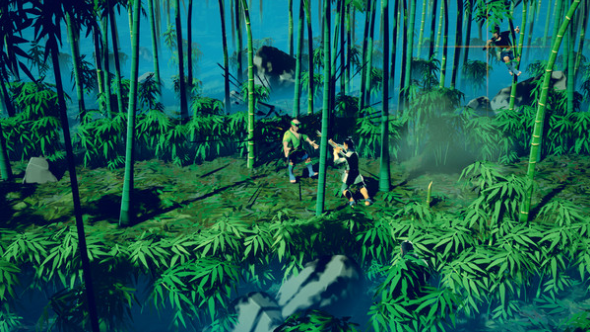 The team at Sobaka Studio, based in Moscow and Kaliningrad, are mostly in their 30s. “In Russia, when we were kids, there were a lot of NES and Sega consoles,” Dmitry Kachkov tells us. “We played the same games.”

Many of those games were the old-school brawlers 9 Monkeys of Shaolin is modelled on. But unlike its forebears, 9 Monkeys arrives in an age of normal mapped textures, dense vegetation, and dynamic shadows. While these technologies have allowed developers to make games more beautiful, they provide plenty of opportunity to overcomplicate too. 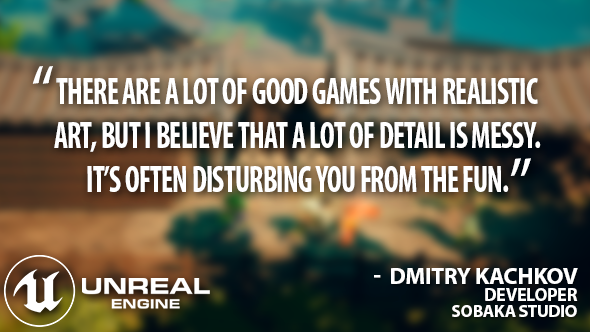 “Our first game, Redeemer, had a very realistic setting and lighting,” Kachkov says. “My belief right now, with experience, is that it’s bad for games. There are a lot of good games with realistic art, but I believe that a lot of detail is messy. It’s often disturbing you from the fun.”

The more stylised look of 9 Monkeys works to keep the action readable at all times. Kachkov compares it to that of a very different game, Firewatch. Firewatch was art directed by Olly Moss, an illustrator whose prized posters are often defined by their high contrasts.

“A lot of people call it cel-shading,” Kachkov says. “You have highlights and shadow, and that’s enough – you don’t have smooth transitions between. We have high contrast lighting, so you can read enemies just by looking for their shadows.”

The feedback under your skull 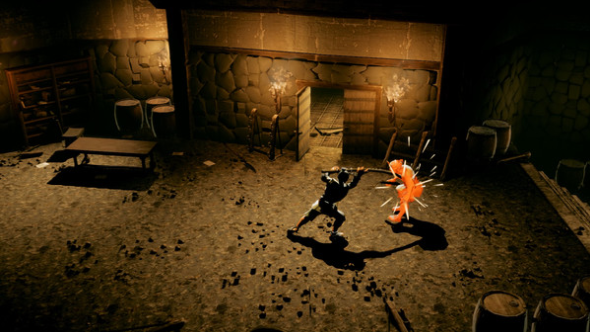 A number of visual tricks help indicate what’s going on in 9 Monkeys. Enemies are illuminated with backlighting so that their silhouettes stand out from the environment. Their attacks, meanwhile, are clearly telegraphed with flashing effects.

“We need to clarify for the player,” Kachkov says. “Do you charge your attack, do you jump, do you avoid?”

“You know for sure you hit him,” Kachkov explains. “He might not react, because he’s a strong guy, but he flashes red. You need to feel feedback from a game under your skull, in your brain. Without trying to move closer to the screen to try and figure out what’s happening, you need to read [the action] very easily.” 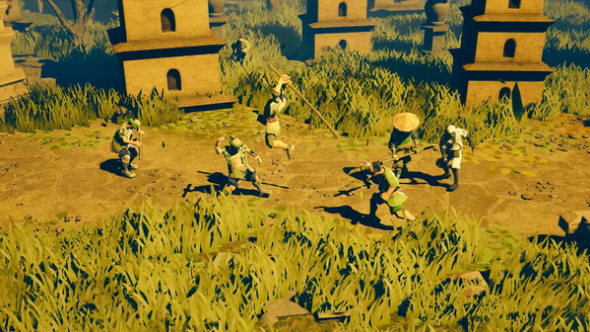 9 Monkeys of Shaolin can be played in networked co-op – a nice idea that’s created a lot of extra work for the team at Sobaka.

“It needs a lot of testing and iterations,” Kachkov says. “But with Unreal Engine 4 everything is easy – you don’t need to spend a lot of time devising your netcode and protocols and so on. You need to know some basics, and it gives you everything you need. It just takes a lot of time.” 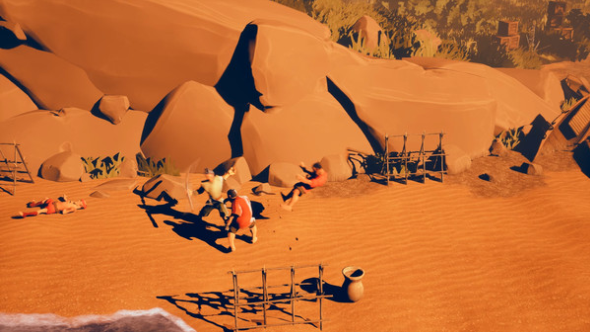 Sobaka’s last game, Redeemer, was an isometric fighter that made a feature of environmental kills: impaling your enemies and hurling them into flames. That violent interactivity has been carried into 9 Monkeys of Shaolin in the form of destructible objects – barriers, crates, and wooden barrels that come apart beneath the weight of hurled enemies.

Here’s how it works: when you attack an enemy, the game runs a check for the area directly behind them. If it finds an object there, the enemy will be hurled a couple of metres backwards to smash into it.

“When they arrive there, we destroy the destructible object, play a particle, and play the animation for the enemy,” Kachkov says. “There’s no magic. When there are a lot of objects in the level and you strike the enemies a lot, something will always happen, just by the nature of the space.”

Despite all the thought and artistry behind the brawling, Kachkov isn’t confident that the press will recognise the value of 9 Monkeys of Shaolin beyond nostalgia.

“There are a lot of experts and critics who will tell you that your game is shit,” he says. “I’m ready for this. But I believe players will feel that this came from our childhood, and that it’s just fun to beat up enemies.”

9 Monkeys of Shaolin is coming to Steam this year. Unreal Engine 4 is now free.

In this sponsored series, we’re looking at how game developers are taking advantage of Unreal Engine 4 to create a new generation of PC games. With thanks to Epic Games andSobaka Studio.