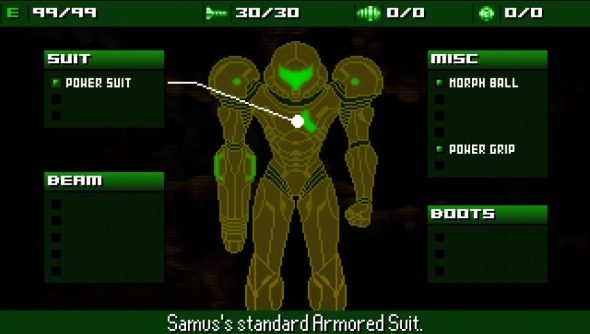 One of 2016’s great gaming tragedies was the story of AM2R – Another Metroid 2 Remake – a fan project to rebuild the old and creaky Game Boy entry in the Metroid series to more modern spec. While the game did survive to release, and even received a v1.1 patch, Nintendo turned their great fiery eye towards the project and shut down any further development, and had almost all downloads stricken from the internet through DMCA takedown notices. Of course, we know it didn’t end there.

Alien worlds beneath your feet, hostile creatures in every shadow. The promise of space adventure is unbound on PC.

The much-loved fangame (hailed by many as being equal or even superior to Nintendo’s official releases) was already out and has since been re-uploaded to countless other sites. While the original developer, Milton Guasti, was snapped up by Ori and the Blind Forest developer Moon Studios in order to lend his obvious expertise to their upcoming sequel, he did outline his sadly abandoned plans for future updates to the game.

Metroid fans don’t give up – if they did, we wouldn’t have AM2R in the first place. While the exact circumstances of it are hazy, it seems that at least a partial release of AM2R’s source-code happened sometime last year, and the fans (largely centered around Reddit’s Metroid communities) set to work on a series of patches aimed at fixing the last known bugs, and implementing the last few features that never had a chance to make it into the original release.

The final planned patch release went live 5 days ago, almost in parallel with the release of Nintendo’s own Samus Returns, their official 3DS remake of the same title. While it would be a fool’s errand to try and list the entire range of changes made by these updates, the short version is ‘Bugfixes, unlockable playmodes and higher quality music’. The largest change being the addition of New Game+ and Randomizer modes, unlocked by completing the game once.

New Game+ presents a truly non-linear reimagining of Metroid 2. Rather than certain bosses being the key to unlock new areas of the map, the entire game-world is open from the start, making your hunt for every Metroid on the planet a far more open and liberating experience, ideally experienced on Hard mode. Randomizer – a favourite for contests among Twitch streamers – offers a more chaotic experience, starting you off bare and with the location of key powerups shuffled unpredictably, making for a more hardcore and improvisational experience.