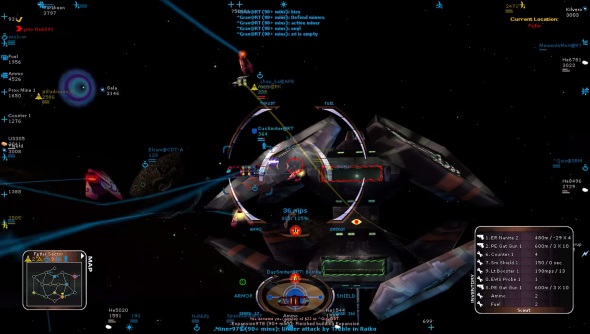 Microsoft’s Allegiance, first released in the year 2000, was a game ahead of its time. This ambitious-but-accessible game of space combat, strategy and large-scale teamwork was designed for online play in an era where many were still limited to a 56k modem if they were online at all. The game was good enough to attract a fanbase who have held a torch for it ever since, and thanks to them, the latest iteration of the game is available free on Steam.

There’s always room for a little more space in your life. Here’s some more stellar void to fill it.

If you’ve ever played Natural Selection or Savage, the structure of Allegiance should be familiar. While the majority of players on each team play as independently roaming combatants as if playing a regular space shooter, each team assigns one player to the role of Commander, viewing the game as if it were an RTS. The commander has direct control over construction units, but can only assign orders to players in the hopes that they’ll follow them.

While graphically primitive compared to the modern crop of space sims (the game is almost two decades old), the upgrade to HD and widescreen resolutions has done it no harm, making the game visually easier to parse than ever before. The netcode also holds up shockingly well – it was designed to be robust enough to handle absurdly high pings from modem-bound players, so should be perfectly playable no matter your geographical location now.

One thing about Allegiance that stands out now more than ever is how the machinegun-heavy, high-inertia space combat resembles Battlestar Galactica’s particular brand of dogfighting, with initial skirmishes looking more like jousting matches than anything, as the combatants sail past each other and make long, weighty turns to line their target up once more. After 17 years, other games have replicated parts of the Allegiance design, but there’s really nothing quite like it, and it’s still worth a try to this day.

Allegiance is out on Steam now for the best price of all: Free!