The original Consortium was a flawed gem. A Deus Ex-ish immersive sim with a Quantum Leap-meets-Star Trek setting. You were invited to inhabit the body of a Bishop – a power-armored man of action – and play out a tense siege scenario aboard a massive sci-fi aircraft time and time again, poking and prodding with dialogue choices and (entirely optional) violence to find your own personal solution.

The successfully fig-funded sequel, The Tower, is now available via Early Access. Presumably aiming to catch a few more eyes, developers Interdimensional Games Inc have released a short but very replayable demo to give players a taste of the choose-your-own-adventure format of the game.

Sneaking around in vents has always been part of immersive sims. Get some more stealthy practice here.

While you should absolutely try the demo yourself, here’s my first experience with it: You start the game falling out of a plane. Fortunately, this is the plan. The original Consortium ended (assuming you survived) with you beginning your jetpack-assisted descent towards a tower supposedly taken over by terrorists, the inhabitants held hostage. You’re sent in to resolve the situation however you see fit.

Your choices begin almost immediately. The tower is within sight, you’ve been hit by lightning and every system aside from your landing jets has been damaged. You’re given a recommended landing zone, but you’re free to set down on any point on the massive rooftop. Or not – I presume that just results in an embarassing death. Your first goal is probably going to be vacuuming up random junk to convert into suit power, allowing you to repair one or more of your damaged systems, otherwise the only weapon you’ve got is a short-range taser.

Surprisingly, the guards patrolling the tower don’t immediately open fire. if you dare to go up and talk with one, you’ll find out they’re under orders not to shoot unless shot at, and direct you to go find their leader. That’s not to say they’re friendly. They’re nervous, and have a gauge detailing their stress level. Sneak around conspicuously, block their path or otherwise make a nuisance of yourself and they get increasingly likely to take a shot at you. 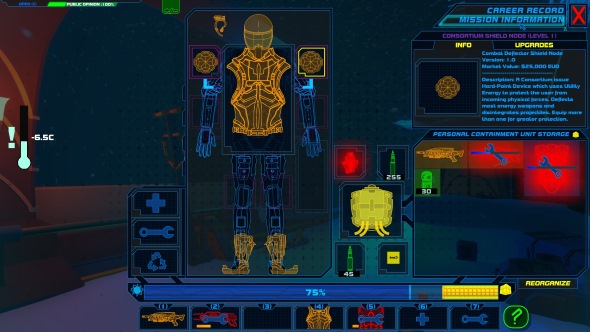 Of course, you’re still free to repair your assault rifle and start popping heads if you’d rather play more of a Team America role, rather than a negotiator and peacekeeper. There are seven possible end-points for the demo, which spans just the rooftop area. My first run ended after surrendering to the rooftop squad captain, who seemed to be merely acting tough while whispering pleas for me to just play along with him. I obliged, and I’m interested to see how that’ll pan out later.

It’s cleary not a game produced with an enormous budget, raising just under $350,000 on Fig, but it’s impressive with how far they’re making it stretch. My only real complaint at this point is that the highest detail settings are a bit hard on my 1060 GTX, despite the graphics being light on texture detail. I’m sure I’ll find a combination of settings that work better, though.

Give it a try and tell us how things went for you in the comments below. You can get the Consortium: The Tower here on Steam, and preorder the full game for £19/$25 (the current early access build spans the first 6-7 hours of the story) if you like it.