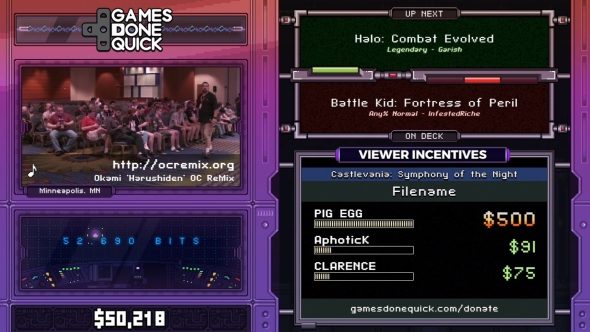 It’s time to GET HYPE, as they say, and pencil in Sunday 4:30pm GMT, January 7th on your calendar for another week-long festival of charitable fundraising and dozens of great games being demolished live in record time.

It’s still some ways off, of course, but for an event of this scale and internationality, it’s best to be warned well ahead of time. As such, the Games Done Quick organizers have released their full schedule for AGDQ 2018, handily auto-adjusted to match your timezone.

A lot of our favourite stealth games are making an appearance at AGDQ this year. Learn to play them properly now, and see them laid to waste this January.

There are some interesting shakeups in this year’s schedule. For the first time in the history of Games Done Quick, there’s no Super Metroid, a hotly contested game often framed as a race between several world record competitors. Instead, this year’s grand finale role is going to sprawling sandbox adventure Zelda: Breath of The Wild, which speedrunners have managed to trim down to under four hours; Not to rush to the final boss, but to complete every main quest and get the best possible ending.

As usual, the show is broken up into themed blocks, often segued into and out of with clever ‘bridge’ games. The best block every year is almost always the Awful Games Done Quick segment.

This year the awfulness kicks off at 7am on January 11th with the bizarre but oddly cool Atari 2600 homebrew game Princess Rescue, before plummeting into truly terrible territory with Arabian Nights, a PC action-adventure game so utterly broken that it must be seen to be believed.

Other PC-centric highlights include Dishonored and 2017’s Prey back to back, both being shattered into a thousand pieces. Dishonored pads out the experience by hunting down every single collectible in the game, extending it to an estimated one hour, wheras Prey is set to be utterly crushed, and over within fifteen minutes.

This is set to be the biggest Games Done Quick event by far, with so many people involved in the festivities that they had to book an overflow hotel to hold them all, after managing to completely fill one. A first for the event. Are you going to be tuning in and watching the Nerd Olympics this time round? Any games or runners you’re particularly keeping an eye on? Share your thoughts and favourites int he comments below.