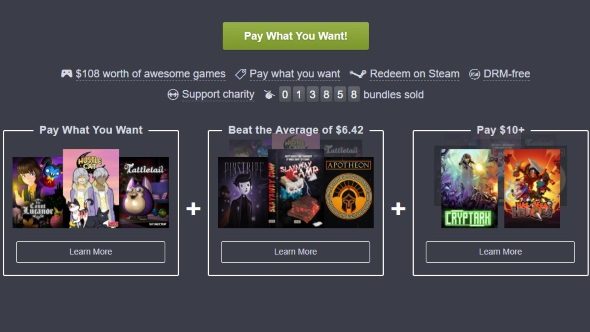 The latest from Humble – the Humble Gems Bundle 2 – is a strange grab-bag of easy indie recommendations, covering the gamut from 16-bit horror adventure, a cat-cafe dating sim and one of my favourite action-roguelikes in recent years. With eight games spanning a bafflingly broad range of genres, there’s something here for just about everyone.

The minimum of $1 will give you:

It’s a strange selection with no real unifying theme other than being good games, so here’s a quick run-down of what you’re getting:

The Count Lucanor is a horror adventure game inspired by the darker side of old fairy tales, drawing mechanical inspiration from a broad range of classics such as Silent Hill and Yume Nikki. Hustle Cat is a very highly rated romantic visual novel about working at a magical cat-cafe, and lets you pick both the gender and romantic preference of the protagonist, so there’s smooches for everyone.

Tattletail is a first-person horror game about surviving the night while being stalked by a sentient, potentially murderous Furby-esque toy. While it clearly takes some inspiration from Five Nights At Freddy’s, the free-roaming nature gives Tattletail its own feel. Pinstripe, while ostensibly horror-themed, is a somewhat more easygoing platform adventure with a vein of wicked humor running through it about dealing with your inner demons – clearly less scary than Furbies.

In the $10 bracket, you get Has-Been Heroes, a unique little RPG/puzzle thing from Frozenbyte, developers of the Trine series. Part Plants Vs Zombies lane-control, part Darkest Dungeon, you manage a party of heroes continually marching into danger, trying to match up the right person and the right skill to handle whatever threats stand in your path.

Personally, my top pick of the bundle goes to Alientrap’s Cryptark. This is a recent personal favourite, and an easy recommendation so long as you don’t mind a little bit of high-intensity twin-stick shooting. Cryptark is a tactical roguelike shooter, where you pilot a mech through derelict alien spacecraft, disabling subsystems and security drones in the hopes of successfully salvaging the ship and turning a profit.

While no slouch in either graphics and audio, Cryptark’s greatest strength lies in its cleverly scaling difficulty – money makes the galaxy go round, and if you want a higher payout and a higher score at the end, you’ll have to cut corners and complete hazardous optional objectives. Sure, this next mission is a cakewalk if you’re just breaking even on your equipment loadout, but if you cheap out, bring a little less ammo or ditch the energy shield, profit margins soar while your life expectancy plummets.

The Humble Gems 2 bundle will be available until Friday, October 13th. Make sure you get your spooks in early.