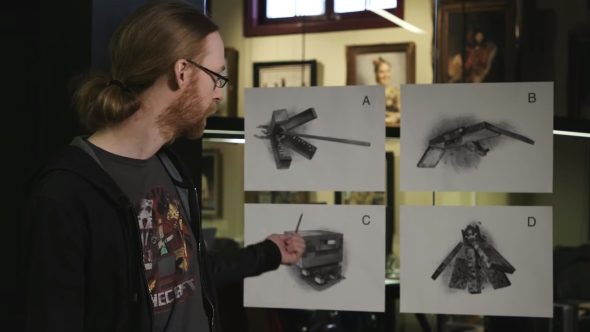 It’s been a good long while since the world of Minecraft has grown. As mutable as the blocky world may seem, the fundamentals have felt set in stone for the longest time, with most development attention being focused on engine and connectivity upgrades.

Mojang are planning on shaking up the status quo a little this year. Not only are they eschewing a physical convention – making Minecon an international livestreamed event – but this November 18th, they’ll be letting the live audience pick one of four new creatures to be added to the game.

Minecraft is considered by many to be the ur-sandbox game. There’s plenty more to pick from though, if building and crafting if your fancy.

While the four creatures pictured in the teaser above are rather vague-looking from their monochrome pictures, three of the four are least seem comprehensible enough. Let’s take a peek!

Creature A appears to be some kind of horrible underwater or wall-clinging maw with an extendable tongue. Perhaps something akin to Half-Life’s Barnacles? Not very friendly looking but could make dark caves more interesting

Creature B appears to be some kind of flying critter, although it doesn’t look much like a bird. A manta ray or similar with a singular underhanging claw? A bit odd, but I can deal with that.

Creature Cis a squat, snaggle-toothed little dorkus looks like it’s wandered straight in out of Cubivore, and as such I want to hug it and pet it and call it George even if it’s going to try and eat my face.

Creature D is a face floating atop a bunch of errant floating polygons and I have absolutely no idea what it could possibly be. Naturally, I must vote for it out of a love for the unknown.

Just to go off on a tangent for a moment, I do so hate the term ‘mob’ (an abbreviation of Moving Object) when used as a catch-all for every creature in a game. Unles you’re actually a game developer, let’s just not use it. It’s just so charmless and dry. Same with Creeps and doubly so for Adds. Let’s just call them monsters, or animals or ‘weird blocky thinigies’ instead, okay?

Okay. Glad we got that out of the way.

Anyhow, the Minecon Earth stream is set to start on Novemer 18th,5pm GMT, and will run for a mere 90 minutes, during which time people will be able to vote for their choice of critter. Keep an eye on the official site if you want a chance to have your say.