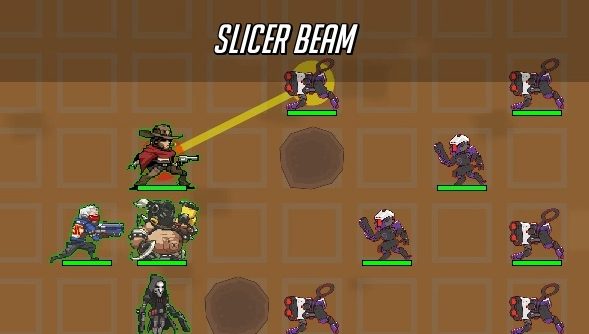 Outside of bot-makers and third-party servers, Blizzard have always had a fairly friendly relationship with their fans and the innumerable derivative works they produce. Hopefully that’ll continue to be the case as this fascinating turn-based tactical fangame sighted on the Overwatch subreddit continues development.

While we wait (and hope) for this to release, pick out your ideal tactical Overwatch team with the help of our best-in-class guide.

The little bit of gameplay footage shown is barebones and short on animation, but seems to have all the core gameplay mechanics worked out. A turn-based battle engine, a grid map (possibly in need of some more complex terrain), and the various heroes and antiheroes of Overwatch square up against a rogue robot swarm as seen in the game’s recent Insurrection event.

Reworking the game into a tactical RPG is a natural fit, given Overwatch’s origins as an MMO project turned FPS. Each character has a solid range of powers and attributes that let them slip easily into any RPG role, turn-based or otherwise. From meaty crowd-controlling tanks like Roadhog, obvious DPS beasts like Reaper, and support and healing from the likes of Mercy and Lucio, they seem at home here, and there’s a lot of room to build on the mechanics shown.

The developer – redditor Lucskywalker – has stated that he plans on releasing a public build within two weeks if things go well and he can polish things up in time. Daringly, he has also contacted Blizzard on the off-chance that they’ll offer their official blessing for the project. Fingers crossed that everything works out and we get our grubby mitts on this interesting new angle on Overwatch.