On stage at EGX, Friday, Julian Gollop – most famous for the original 90s X-Com, and now working on Phoenix Point – spoke about the history of the turn-based tactical genre from its earliest inspirations in tabletop gaming, to his first title released in 1984 all the way up to his current project. It’s an interesting watch, especially now that the genre has returned to vogue through Firaxis’ XCom reboot and no shortage of imitators.

The strategic layer of Phoenix Point has a 4X-ish look to it. Get that itch scratched here.

The presentation itself was divided into three distinct segments. The first 19 minutes dedicated to an abridged history of the genre and his involvement in it. It’s fascinating to see the roots of one of my favourite genres go back to the year after I was born, 1984, with the release of Rebelstar Raiders. Primitive compared to modern tactical games, it was in effect a digital tabletop game of squad combat, with two players competing across three single-screen maps.

The video covers his work in the industry through 1988’s Laser Squad, which introduced so many of the gameplay elements that would make X-Com a classic, all the way up to the tragic cancellation of Dreamland Chronicles: Phoenix Point. Envisioned as a reboot of sorts of X-Com for modern (PS2 and Windows PC) systems. The game was going to introduce direct movement and aiming much like Valkyria Chronicles, but never saw the light of day due to publisher Virgin Interactive going bankrupt and taking much of Gollop’s aspirations with them. 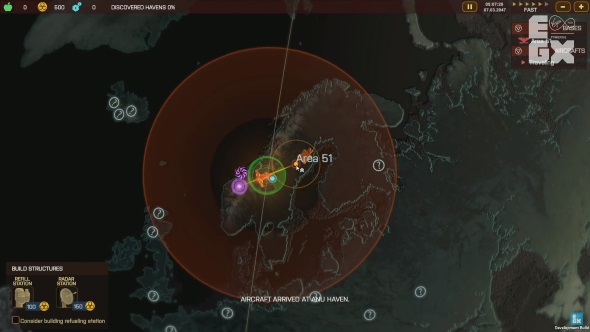 The second focus of his time on stage is a look at Phoenix Point itself. Starting around 20 minutes, he takes a broad look at the setting and style of the game and then a more in-depth look at the strategic overworld layer. While no tactical combat is shown, we do get to see how you control your forces in Phoenix Point, moving a growing pool of vehicles around the globe, exploring ruins within fuel range for resources, technology and potentially allied survivors as you build up forces with the ultimate goal of turning back a massive alien apocalypse.

There’s some exciting ideas in there, with the primarily aquatic aliens gradually altering the planet to better suit them. As the campaign drags on, sea levels rise and usable terrain is lost. The aliens also send out enormous walking fortresses to knock over bases, prompting missions to land on these monsters in an attempt to find a weak-point that will allow you to kill it before losing too much. Aliens aren’t the only threat, with several human factions being potential antagonists if you play your diplomatic cards wrong.

It’s a great look into the mechanics of the game, even if the final release is a long way off. It seems to be a far more simulation-driven system than previous games by Gollop, with more in common with X-Com Apocalypse than the original, or even Firaxis’ reboot. The last section of the presentation is dedicated to a Q&A session, in which Gollop attempts to explain just how they’re planning on preventing players from levelling the entire battle-map, even though the option is there.

Phoenix Point is due for release sometime in 2018, and is available for preorder (along with a bonus free copy of Gollop’s recent Chaos Reborn) with a 20% discount using the code above for a few hours yet.