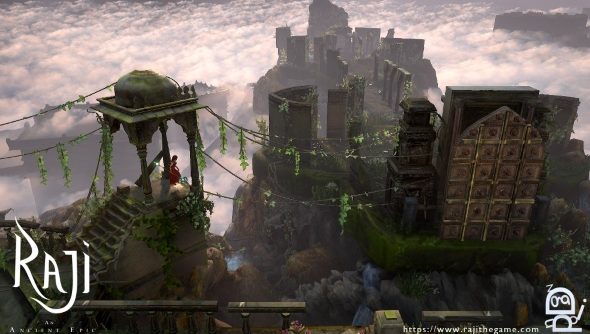 Atop a landscape of spiralling towers, ornate domed buildings and nature overtaking man’s designs, a girl wields a staff of mystical power, and faces down a procession of foes each a half-dozen times her size.

Sometimes, all it takes is a quick peek at a game to catch my interest. Raji: An Ancient Epic is one of those immediately appealing indie titles. A hack n’ slash action-adventure set in a world taken from the pages of ancient Indian myth.

If you want a fresh take on well-worn tropes and genres, you’ll find it more often than not in the mountain of amazing indie titles on PC.

You can see for yourself that Raji is a gorgeous game. The developers – Nodding Head Games – have travelled far and wide to research medieval Indian and Indonesian architecture, and the effort seems to be well reflected in the gorgeous scenery. The game itself looks a little like Bastion, with a flexible combat engine supported by your choice of gods to follow, and the blessings each can offer you in return.

At present, Raji’s Kickstarter is struggling a little. Despite the clearly gorgeous trailer and generous playable demo available direct on Steam, there’s not been much uptake. At the time of writing, it’s taken a little over £22k, out of a base target of £120k. If the game is fully funded, it will be headed to Switch, Xbox One and Playtation 4 as well as PC, too, and there are already a few stretch goals on the cards, including an official comic, assuming all goes to plan.

Personally I hope it makes it. It’s great to see a fantasy setting utterly devoid of orcs and goblins and knights. There’s a lot of interesting new ground to be covered in Indian myth and legend that hasn’t really been touched on in games.

You can try Raji for yourself on Steam here. If you find yourself liking the cut of its jib, a Kickstarter pledge of £16/$20 is counted as equivalent to a preorder. The game is still a long ways off – Nodding Heads estimate that July 2019 would be a fair target – but pretty things always take time to make.