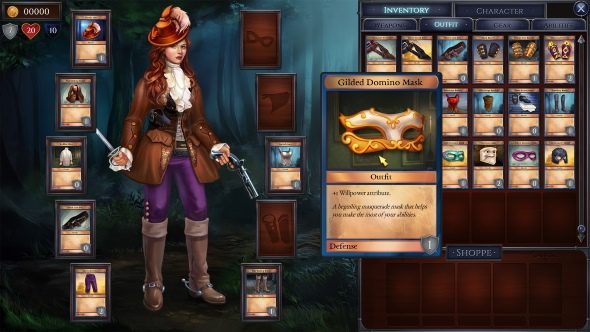 It’s been over two years since we last covered Shadowhand, and the card-battling RPG has grown into quite an impressive piece of work since. Set against a backdrop of Gregorian-era adventure, you play as a young noblewoman by day, but don the mask of Shadowhand, notorious highwaywoman, by night.

Been a long time coming, but the game is finally close to release. Look within and check out the launch trailer, along with a little more detail on the mechanical workings of the game.

The past years have seen an astounding boom in the digital CCG market, with a new deck-building RPG seemingly coming out every few weeks. We help you pick out the best of the bunch.

Coming from the developers of the surprisingly good Regency Solitaire, Shadowhand looks to play quite unlike any CCG you’ve tried previously. While you do build a custom deck and use it to gear up your character, the heart and soul of the game is in solitaire-style progression and puzzling, meaning that there are some scenes where you’re playing against a scenario, rather than a direct opponent.

Beyond that, there’s a much higher quotient of RPG elements than your average fantasy CCG as well, with your character capable of donning a wide variety of visible equipment with stats and modifiers that have a significantly deeper effect on gameplay than merely changing what cards you’ll be drawing.

All that, plus the unusual setting – historical swashbuckling needs a little more time in the spotlight – makes this one an intruiging proposition, and one I’m eager to try my hand at.

Shadowhand is set for release for Windows and Mac alike on December 7 on Steam, Gog, Humble or direct from the developers, and will carry an RRP of $15, minus a small launch discount.