It’s hard to believe that Star Control is regular gaming news again, but here we are. Not only is the series returning twice over with Stardock’s Star Control Origins providing a prequel, but original developers Toys For Bob have resurfaced to produce an as-yet-unnamed direct sequel to Star Control 2.

We don’t talk about Star Control 3.

In order to help people get up to speed, Stardock has re-released the original two DOS games onto Steam this week as the Ur-Quan Masters bundle, although even Stardock’s CEO acknowledged in a forum post that you might want to check out this fan-made HD remaster based on the 3DO version of Star Control 2 instead.

Sci-fi is back in a big way. Even Star Trek is back on form! Get your starship fix here.

The Ur-Quan Masters HD is a genuinely impressive piece of work. Based on an already-good source port combining the best elements of Star Control 2’s PC and 3DO versions (cutscenes, full voice acting, CD format music and more), the HD remaster doesn’t just upscale the graphics butre-draws them all. Every frame of animation has been painted over, retaining the look but adding fine detail. A true labor of love.

While billed as a Beta, the HD remake is as complete as it could possibly be. It seems the developers just never got round to officially sticking a fork in it and calling it done, so don’t let that put you off. It’s been out since 2013, and widely considered by fans to be the definitive version of the game. 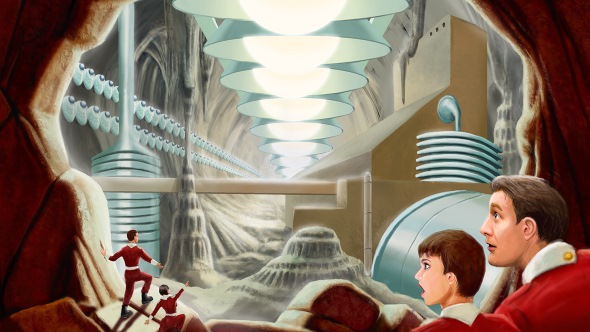 If you’ve never played Star Control before, you’re in for a treat, assuming you skip the first game, which was very much a learning experience for Toys For Bob – You’re honestly not missing much there. While Star Control 2 is a little clunky and esoteric by modern standards, this was the Mass Effect of its era, defining many of the elements you might have taken for granted in Bioware’s classic sci-fi RPG series.

The sprawling multi-choice dialogues with weird aliens are present and correct, along with a realtime shooter combat engine (albeit space-based) and even the promise of space-romance with some comely blue space-ladies. Personally, I still think that Star Control’s weird and wonderful alien races are far more exciting than anything Bioware gave us. Just wait til’ you meet the Spathi, or get to fly their ships.