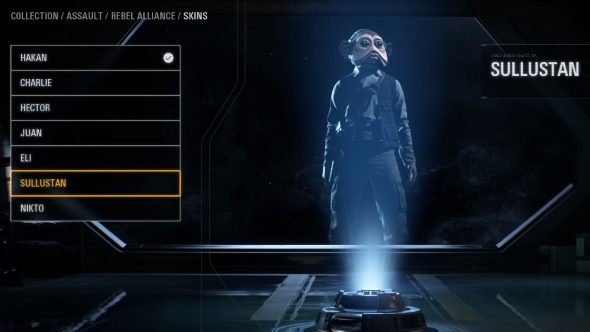 It’s nice to be able to talk about Star Wars Battlefront II for once without it being (explicitly) about loot boxes. This week, intrepid dataminer Uninspired Zebra revealed an interesting find via the BattlefrontTWO subreddit – an extensive character customisation menu, partially complete although not accessible via legitimate means at present.

It’s not a massive surprise – we’ve known for a while that some customisation features were planned, just not ready in time for launch. But we do get a sneak peek at some of the alternative character skins that are likely on the way, including some that will presumably be premium items.

Star Wars Battlefront II may yet be great, but at the moment it’s hamstrung. While they continue to patch, tweak, and tune, check out some real modern PC classics to pass the time.

As you can see in the video above (again, captured by Uninspired Zebra, and a few more skins shown in this Imgur gallery here), there are a lot of skins to pick from. Many being small variants (such as clone legion liveries or faces on rebel soldiers), but there’s a few more flashy ones in there, presumably set to be equivalent to Overwatch’s rarer skins, depending on how they plan to let them be unlocked. I do question some of the names for rebel grunts, though. ‘Hector’ ‘Juan’ and ‘Eli’ don’t sound as Star Wars’y as they might, if at all.

Similarly, Uninspired Zebra also unearthed a few as-yet unimplemented maps playable in Arcade mode, complete with AI navigation meshes, which you can see in the video directly below. Presumably these will be coming to the game in some capacity later, once they’ve had their requisite spin in the QA wringer.

At the moment we have no idea how much of this stuff will be fully implemented in the game once EA DICE are satisfied with it, but it seems fair to expect that while some of the more basic character models (like the human variants) will be unlocked by default, more exotic ones such as the alien races will either need more extensive play to unlock, or perhaps drop as rewards in loot crates.

Personally, I’d be happy to see the current Star Cards and alternate character models switch places, with character upgrades being tied to experience progression (thus allowing fairer matchmaking), while tweaking and tuning your custom Star Wars cast could be made the reward for those lucky enough to roll high on the loot boxes. Something closer to Overwatch, basically.

How do you think this’ll go down? EA have said they plan on reactivating the cash shop for the game eventually, but are waiting until the fires have died down and the loot box system has been reworked. Will we see sweeping overhauls and a shift to a more cosmetic economy, or will they retain the status quo? Sound off in the comments below.