The medieval fairytales of the Grimm brothers were strange and gruesome. Stories of children having their hands chopped off, and young women getting their eyes pecked out. One story, called ‘The Ungrateful Son’, tells the tale of a greedy young boy who hides food from his father. As his punishment, a big toad latches itself onto the boy’s face and refuses to let go. The boy is then forced to feed the toad every day for the rest of his life, or else it will get hungry and eat his entire face. As a protagonist, your odds of keeping every part of your body until the last page were low.

It was these fairytales I was reminded of while playing Asobo Studios’ game, A Plague Tale: Innocence. It’s a story of two children, Amicia and Hugo, who must survive the black plague in 14th century France. In this rendition of history, the disease has manifested in thousands and thousands of rats, who will swarm to fresh meat and devour anyone who steps into the shadows.

Unlike the naughty children in the short stories of the Grimm brothers, Alicia and Hugo have done nothing wrong, they’re just trying to survive a country ravaged by war and disease.

A Plague Tale is structured into chapters, each section focused on Amicia and Hugo’s journey through a particular treacherous area. It’s not only the dark force of the rats devouring the country – France is at war with Britain, and several chapters take place in devastated landscapes. Asobo Studio has created an oddly beautiful world from all the gory chaos. In one part you guide the children through an abandoned farm at night, its windmill has been set on fire illuminating the surrounding fields littered with bloated pig corpses, the rats festering inside. 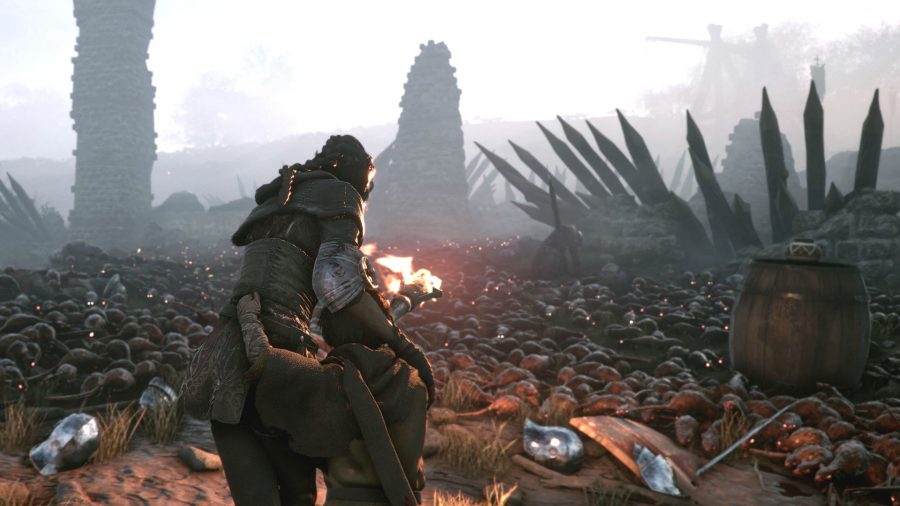 Facing off against angry mobs of villagers, the governmental Inquisition, and thousands of the aforementioned bloodthirsty rats, Amicia and Hugo have few ways to directly fight back. Gameplay is made up entirely of stealth and environmental puzzle-solving, plus a quick-time-event chase sequence or two.

Mounds of dirt rise up from the ground and the rats smash them open, swarming onto the surface

Amicia has a small sling that she can use to hurl rocks, allowing her to cause distractions, and within the first couple of hours there is a lot of sneaking, distracting, and running. Sneaking past some guards, running away from angry town’s people, making a distraction to slip past some more soldiers – it’s a little repetitive.

But, thanks to the game’s world building and art direction, it doesn’t become frustrating. As you creep past guards, you can hear them chatting about a dark force beneath the surface. As you press on, you realise they’re unnerved – they don’t want to stay after dark. It’s a great build up for what comes next, down in the dark crypts, where you first encounter the real stars of A Plague Tale.

As the biggest threat in the game, the rats are absolutely terrifying. Even though the horde is made up of tiny bodies, they all move together with a single hive mind. A torrent of them with spill out from the narrowest gap in a wall, a tidal wave will crash around the sides and underneath doorways, a new river will flow through the cracks in the ceiling – there are an overwhelming number of them ready to rip the flesh from your bones. 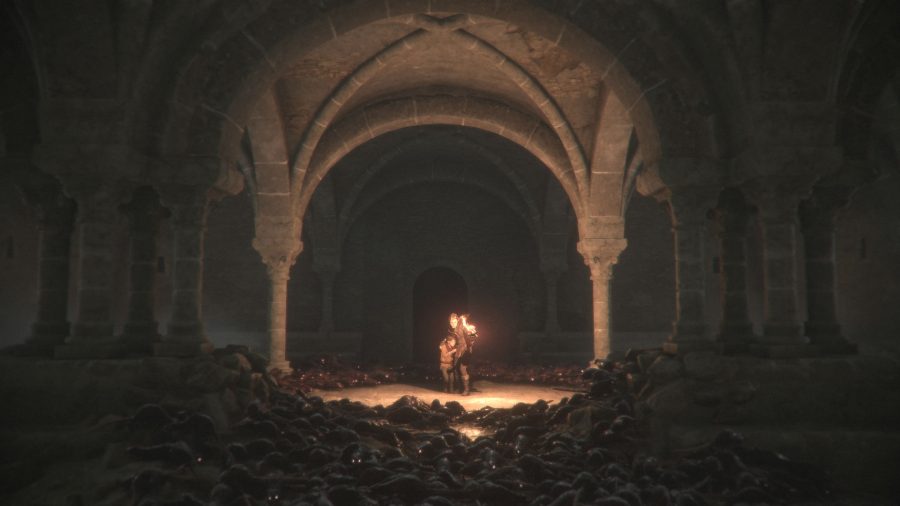 There’s one sequence where you are running through a field, and mounds of dirt rise up from the ground – rats smash them open, swarming out onto the surface. It feels like the game itself is going to burst at the seams. Together, the cacophony of tiny, grizzled squeaks sounds like a scream.

The rats then swarm onto the soldier, covering them from head to toe as they squeeze around his armour and eat him alive

The only way that Amicia and Hugo can protect themselves against the rats is by staying close to a light source. Creating paths of light to reach the next area is key to not being devoured alive by 1000 sets of tiny teeth. It seems strange that rats would be deterred by light, but hints in what I saw point to an arcane element controlling them – medieval alchemy is bubbling beneath the surface.

Managing light sources is how Amicia and Hugo are able to outsmart those pesky flesh eating rodents, but the power of the rats can also be used in other creative ways. If an enemy spots the siblings, you can use Amicia’s sling to hurl a rock at their lamp and smash it, leaving them without a protective light source. The rats then swarm onto the soldier, covering them from head to toe as they squeeze around his armour and eat him alive. 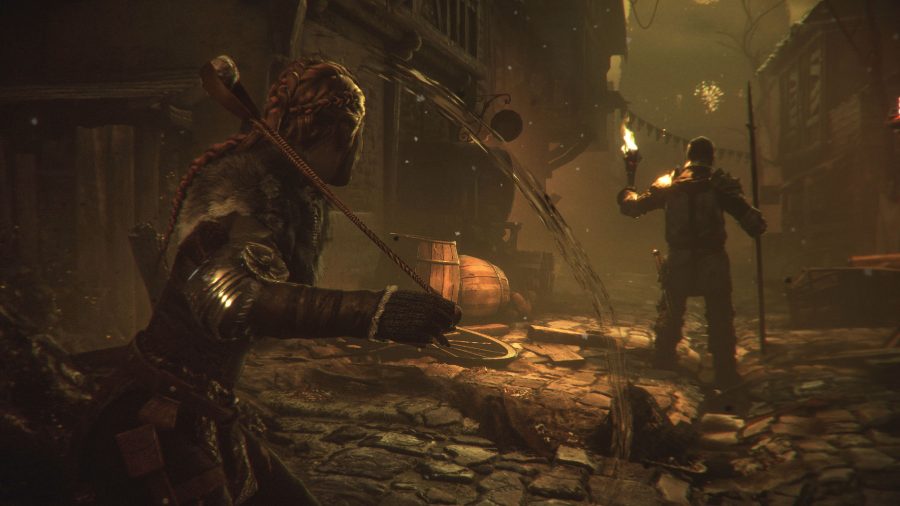 As might be now clear, A Plague Tale has some gross scenes that are squeamish to watch as an adult, let alone for its child protagonists. Amicia and Hugo have to survive some horrific events and, similarly to Clementine and AJ from The Walking Dead, both lose their innocence along the way.

Having to kill an enemy soldier? For me as the player, that’s no problem. I’ve killed many monsters and humans in videogames and could have happily skipped past my fallen enemy. But for Amicia, it’s the first time – and the game takes a moment to stop and make you notice how horrified she is at her own actions.

It’s a lesson for Amicia, and it’s a lesson for me as well. It seems likely that A Plague Tale will slowly escalate these psychological moments throughout the game, and that Amicia will have to make some difficult moral decisions in the name of survival.

A Plague Tale: Innocence would sit nicely next to a game like Hellblade: Senua’s Sacrifice. This journey is going to be a melancholy one, told as a short, impactful experience with some stellar storytelling and stunningly haunting art direction.