The past 20 years has been tough on the traditional point-and-click adventure game. What used to be the prime genre for storytelling and puzzle solving struggled when the medium embraced 3D technology, and so it’s been continually reworked – from Tomb Raider to The Walking Dead, and then Life is Strange. A Plague Tale: Innocence is the latest evolution of the adventure game, and while it’s wonderful, it isn’t without flaws.

The game is set in France, circa 1348. You mostly play as Amicia de Rune, the teenage daughter of a wealthy household, and despite the plague spreading through villages she doesn’t worry about anything other than her young brother Hugo being sick. Their whole world is shattered when the Inquisition comes calling, forcing the siblings to flee for their lives, and beginning a dark adventure about using wit to get the upper hand against a range of unrelenting pursuers.

It’s a wonderful story that’s told well, with the central, twisting mystery behind the weird behaviour of the rats, the spreading illness, and the motivations of the Inquisition keeping a tight grip on the narrative for the ten-hour duration. However, it probably won’t be to everyone’s taste, as the historical grounding is swayed when the plot gets fantastical towards the end. If you’re the type of person who hates the White Walkers and dragons in Game of Thrones then Plague Tale might perturb you for the same reasons.

One aspect that shouldn’t be divisive, though, is the depiction of its young stars. It’s rare to have videogame stories told from the perspective of kids – Life is Strange is the most recent one that comes to mind – so it’s great that A Plague Tale is another of those, but even more so that it does it right. 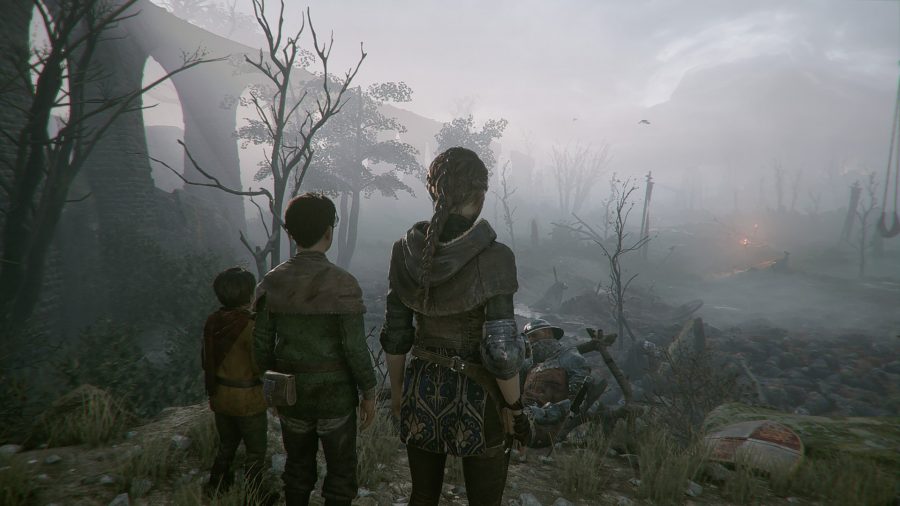 I’m no expert on how 14th century French noble children talked, but the interplay between the characters feels natural, particularly between Amicia and Hugo, who clearly trust each other but will occasionally fall out. You get to enjoy moments with them as they’re just being kids, trying to act as adults, or being selfish in ways only children can be. It’s funny and endearing, and helps to sweeten the bitter taste of the bleak tale.

Despite being an adventure game at heart, A Plague Tale is far more ambitious than that, as it occasionally leans heavily into stealth and action. It’s at its best when sticking to the hallmarks of its genre, giving you puzzles to solve, where you use skills or items in the environment to outwit enemies.

Sometimes you have to solve them quickly, leading to a real sense of desperation, while at other times Plague Tale will give you a long, harrowing section to endure – one rat-infested death trap in Chateau D’Ombrage is like something out of Shadow of the Tomb Raider. Most of these moments are made even more difficult by the fact that Amicia is usually holding her brother’s hand. It’s a sweet mechanic akin to Brothers: A Tale of Two Sons, and like its use in that game, really makes you feel connected to both siblings.

Where it starts going wrong is when developer Asobo Studio seems to forget that Plague Tale is a linear story game and not an epic open-world title. Crafting should be reserved for larger games, where you’re expected to explore freely – in a short adventure like this it just feels unnecessary. What’s worse is that a significant amount of your time is spent hunting for crafting materials. Making upgrades for Amicia’s equipment feels particularly unnecessary – couldn’t I just unlock them by progressing through the story?

Plague Tale’s main problem is having too many obvious videogame mechanics, so why shouldn’t there be collectables too? Fortunately, the items you can find actually help to expand the lore of the world - or, in the case of flowers, to sweeten the relationship between Amicia and Hugo. It never gets old watching Hugo pick a flower, place it in his sister’s hair, and having her tell him about it. Lovely.

Far too many gameplay mechanics are introduced, to the point that new ideas are still being brought in right up until the final cutscene. Consequently, many of these get short-changed: the ability to command your beefy ally Rodric to knock doors down is used approximately four times in the entire game, and you only need to dismantle a foe’s heavy armour with Amicia’s sling once.

Nevertheless, most of the gameplay elements do work very well. Stealth is the predominant one, as it often gives you multiple ways to approach an encounter: distracting guards, attracting rats, lighting or snuffing torches, and forcing armoured enemies to remove their helmets. Notably, not all of these options involve killing, which neatly plays into the ‘innocence’ of the game’s title and themes. But I wish it went further and removed lethal force from the picture altogether. 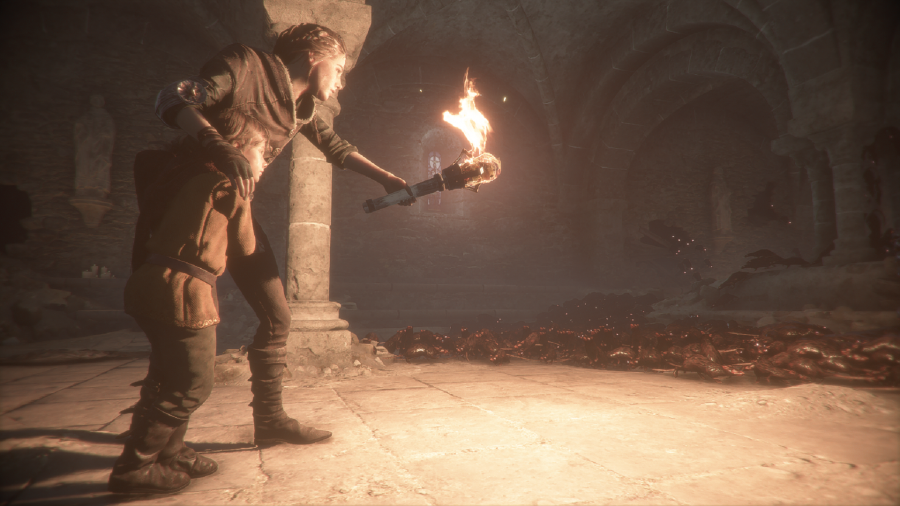 During the first hour I was delighted by the prospect of a stealth game without murder, but then boom – Amicia’s sling becomes a tool for instant death. The violence gets across that these kids have to go through huge difficulties to survive, but along with other videogame elements like crafting and boss battles, the believability of their story begins to erode. I can’t help but wish that Asobo had the confidence to leave these parts out.

Point-and-click fan? Pick up the best adventure games on PC

A Plague Tale: Innocence is a game that dares to be different, and for that I applaud its developer. It’s essentially a point-and-click adventure game that’s been brought up to modern standards to compete with the big titles of today. At times there’s a sense that the team behind it is trying too hard to do this, but there’s no denying the strengths of Amicia and Hugo as the stars – I was really rooting for them the whole way. It’s still very special when a game manages to play with your emotions like that.

One of the most engaging and original story-based games this year. It’s dragged down by some trite videogame elements but its characters elevate it above its contemporaries.