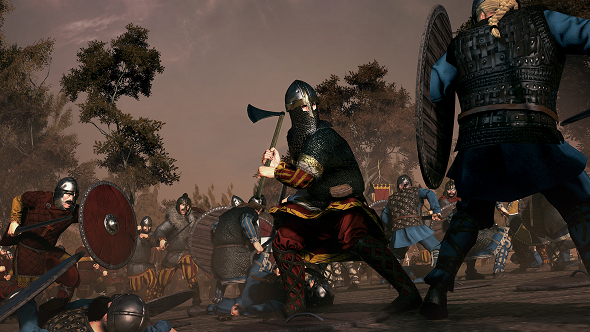 The next Total War game isn’t quite the era-spanning epic you might expect, but a more focused game that looks at Britain’s history in the late 9th century. It was announced last year as Total War Saga: Thrones of Britannia, and today the first faction leader was revealed – you can play as Alfred the Great, King of Wessex.

Famed for his victory at the Battle of Edington in 878, Alfred was one of the leaders to best a Viking invasion, resulting in a deal with the Vikings that would become Danelaw, the area of land that was run by Danish law as opposed to Anglo Saxon law. It continued through the 9th century, and included much of what is now North and East England.

Given the importance of the Battle of Edington for Alfred the Great’s history, it’s likely that the opposing leader, Guthrum, will also be appearing in Total War Saga; Thrones of Britannia, although whether he’ll appear as a faction leader as well or not is unclear.

The Steam page for Total War Saga: Thrones of Britannia is now up, giving some more details – while there’s no trailer, it mentions that King Ceowulf will also be a faction leader in the game, and gives faction traits and cultural (given both Ceowulf and Alfred are Angle Saxon) traits for both Ceowulf and Alfred.

The Anglo Saxon cultural trait is called ‘Fyrd,’ and is described on Steam.

“In Anglo Saxon times, the Fyrd was a form of conscripted army composed of self-armed and armoured freemen, called upon to defend their lands when the need arose. One of Alfred the Great’s many reforms was to better formalise the system, ensuring wealthy landowners contributed men and material.

“To reflect the Fyrd system, the English Kingdoms in Thrones of Britannia may recruit additional levy units based upon the number of settlements they own. Over-reliance on levy troops carries penalties however – if too many are fielded, the populace will rail against excessive conscription and public order issues will arise.”

Five cultures and ten factions will be present in the final game, so four more cultural traits and eight more faction traits are yet to be revealed.