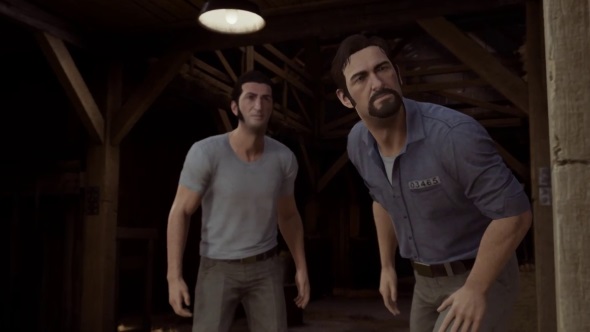 A Way Out – the prison escape movie that is actually a co-op game – has found its way out of EA’s offices and into the hard drives of players, as part of an escape plan commonly known as a ‘release date’. I have been playing it with PCGamesN’s deputy editor Julian, and we have some joyful, exciting experiences we’d like to share with you. But A Way Out is not a normal co-op game, and so our feature is not a normal website column.

Our list of the best co-op games is full of great things to play with friends.

In A Way Out, two players take on the role of convicts Vincent and Leo, and must work together to complete their story of escape and revenge. The two characters interact in different ways – sometimes close together, at other times further apart – and so each has their own story. As such, we have two inter-woven features. This is Vincent’s story, told from my perspective. Click the bold links in the story and you can read Leo’s story from Jules’ perspective, and see how we help and hinder each other along the way. Click the non-bold links to be taken to the right time in the video above.

Let’s jump into the story, not at the start, but a couple of hours in. By this point in our journey, we have beaten up prison thugs, outrun police dogs, and caught slippery fish with nothing but patience and a branch, but our next choice is our toughest: do we tie up an old couple and steal their possessions? Crouched outside their idyllic country house, we opt – via a voting system that will only progress when the choice is unanimous – to cause a distraction and force them to leave the estate, despite Jules’s proposition of violence. 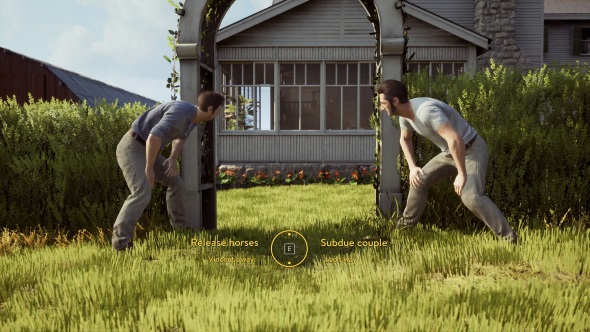 The ideal distraction is found next door in a barn full of horses. As Jules explores the ground floor, where the horses are penned up, I head upstairs to work out how we can cause the mustangs to bolt and flee the barn. Hopefully, the old couple will chase after them, allowing us free entry to their house. On the gantry I discover a cement mixer, which will certainly make enough noise to startle the horses. Holding down the push key, I realise that I can only fill half of the progress bar: I am unable to shift it on my lonesome (look, I’ve had a hard life of sitting down and typing words, OK?). I ask Jules to help me out, and our combined efforts fill the meter to push the mixer off the ledge. The resulting crash works as predicted, and the horses’ owners give chase, leaving the house empty. We then simply walk into the house without fear of an old person resorting to the Second Amendment.

The house is full of trinkets, many of which can be interacted with in a style reminiscent of Telltale’s adventure games. Jules instantly starts rifling through the roomsin search of something to entertain his nefarious disposition. I leave him to it, and focus my efforts on actually finding an item of use. A musket on the wall proves to be nothing more than a replica, but upstairs I find the wardrobe filled with clothes that are just my size. The game offers me no choice of threads to thieve, but I am happy with the jacket chosen for me. Finally stripped of prison blues and looking like less of a wanted criminal, we stand a better chance of evading the police search party. At least, that’s what Vincent and Leo think. I am sure the game has other ideas… 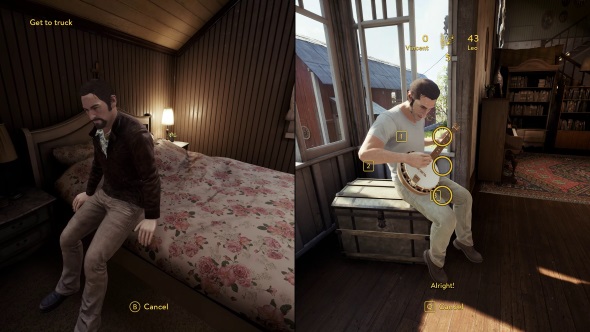 Returning downstairs from the bedroom I find that, rather than preparing for the journey ahead, Jules has been playing the couple’s musical instruments. While this is clearly an absolute waste of time that has left fingerprint evidence all over a banjo fretboard, I do not deny him the opportunity for a tuneful duet. A Guitar-Hero-like minigame is triggered by using either the banjo or piano – a series of button prompts fly across the screen, increasing in speed and frequency the better you perform – and we play ourselves a jaunty tune to conclude our business here. Jules will claim he ‘won’ this, but since was musical harmony a competition? This competitive music duel is a great example of A Way Out’s borrowing of mechanics for single-use segments – we likely will never see another instrument for the rest of the game, nor an item that operates in quite the same rhythm-action manner.

With both of us having pilfered from the wardrobe of a man with solid incognito fashion choice, we head to the next building on the estate: a huge outhouse containing a rusting truck. Decaying wheels are better than no wheels, so we get to work. As Jules busies himselftrying to free the truck from the makeshift stands it is propped up on, I search the upstairs for a replacement wheel.

A tyre iron lying on the side will come in handy, but the spare wheels are stored on an inaccessible gantry. Looking to test out my upper-body strength (there was barely time for a pull-up during my short stay in prison) I hang from a chain that Jules then sends to the otherside of the room via a pulley system. With a couple of button taps I push the wheel off the gantry and then use the iron to screw in the locking nuts by following the push-and-twist prompts. That should be enough to get us going. 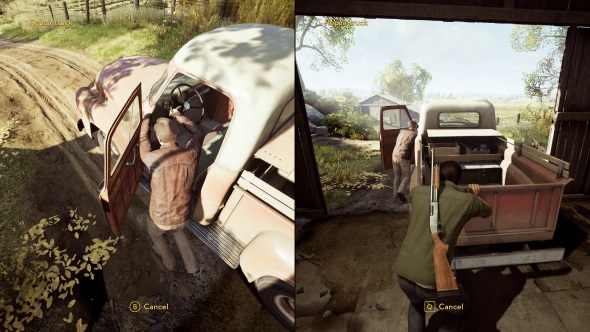 We push the truck out of the barn and down the hill, at the bottom of which lies a tractor that I can use to jump start the truck’s engine. With help from Jules, the truck rattles into life, and just in the nick of time: that miserable old couple have returned home, and seem to be staunch supporters of the right to bear arms. Time to make like Speedy Gonzales.

Our escape from the farm turns the game on its head: the Telltale-style button-prompt mechanics are replaced with something far more reminiscent of action games. I am behind the wheel of the truck, able to swerve and brake as I please, but that freedom is short lived as the cops quickly interrupt and have clearly not forgotten that we are both supposed to be locked up in the slammer. Jules, who stole a shotgun from the house, sees this moment as an opportunity to enact some ‘justice’ (see: shoot every approaching police officer). I would normally be against this, but since the game is throwing dozens of speeding interceptors at us, my instincts from playing hours of GTA and Uncharted kick in – bullets are the solution to any high-speed chase.

While Jules does his thing with the pump-actionfrom the back of the truck, I drive in what I hope is an unpredictable fashion, tricking the police into taking other routes, and slamming into the side of those who catch up with us. I hope all the movement doesn’t ruin Jules’s aim, but let’s face it: he has never been a man of precision. Plus, if all the shaking means he misses most of his targets, his new prison sentence will likely be much shorter. That’s how this works, right? 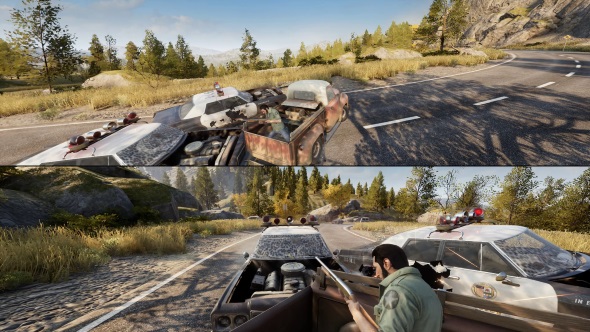 My driving skills appear to have saved us from the legions of cop cars, but they cannot prevent me from driving straight from a spike trap (mostly due to the fact this is done in a cutscene). The truck swerves, careening down a rocky outcrop to the shore of a river. Crawling from the wreckage, the sight of a boat signals what we must do next. Oh god, does this series of unfortunate events ever end?

Well, it does here, at least for our play session. But our time at the farm has demonstrated much about what makes A Way Out a good time. Like a Telltale game, it directs much of its efforts into being an accessible interactive movie, with most of it stemming from simple button prompts and gentle mechanics. But from cinema, A Way Out understands that every key scene has to be memorable. As a game, that must come as much from the mechanics as it does the story and visuals. It is, therefore, not enough to rely on a small stock of repeating interactions.

There are numerous moments in the chapters prior to this farm area that use specific mechanics which, just like the Guitar Hero minigame, are dropped and never seen again. That doesn’t make those moments feel disposable; they feel special. And that is a sentiment that I would apply to A Way Out as a whole. Its low-strain, Telltale-like interactions may feel familiar, but you have not played a co-op game that has been put together in this arrangement. Thanks to its largely linear sequencing you will likely play A Way Out once and never again, but it is a special experience that will cement itself in the memories of both you and your co-op partner.