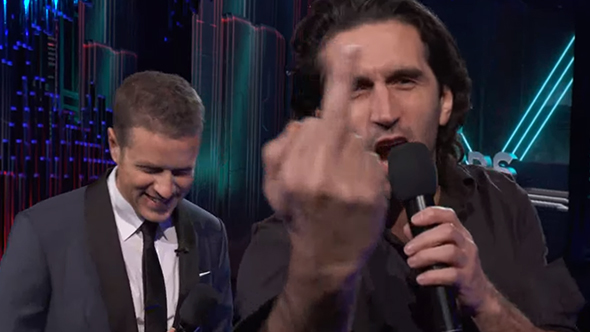 In theory, there was a new trailer and a release date announced for the new, EA-published co-op narrative game, A Way Out. That’s good and all – A Way Out looks very cool – but the trailer was overshadowed by its introduction from director Josef Fares. Fares previously directed Brothers: A Tale of Two Sons, but had worked on various films for years before that.

But also, Fares wants you to know that “the Oscars can fuck themselves up, this is the shit,” referring to The Game Awards. After that, he paused for a second to ask Geoff if he could swear (better to ask permission than forgiveness, I suppose), and stared straight at the camera to say “fuck the Oscars! Fuck the Oscars! Fuck you!” Videogames are just that good, he says. Interactive entertainment, best stuff there is.

Fares wasn’t done there, though. Keighley tried to redirect him back to the game itself, and Fares responded with absolute confidence. If the whole world tells him the game is shit, he’ll disagree. He says if you see the game from the beginning to the end, it’s impossible for you not to like it.

That’s because it’s Fares’s game and his alone. “It doesn’t have anything [to do] with the EA shit going on, with the loot box and stuff.” EA’s been good to him, and “all publishers fuck up sometimes,” after all. You should really just watch the thing for yourself.