There’s a certain breed of super-scaled, operatic beat ‘em up that’s been honed over decades on the consoles but never quite found a permanent home on the PC. Games like God of War, Devil May Cry and Bayonetta, that make a virtue of planet-punching protagonists, and that think groundedness is something that happens to fallen enemies.

Veterans of these games know that they ask for persistence, repetition and no small amount of energy. And that’s exactly what indies Galaxy Interactive have shown in bringing the genre to the PC as Age of Blood.

Age of Blood features two protagonists. Fittingly, the first has fought his way into existence against great odds. Cael was inspired by Robert E. Howard’s Hyborian mythology and the Prince of Persia, and starred in the short stories of John Waynick’s youth long before the environment artist began work on Age of Blood.

As an avatar, he exemplifies the classical virtues of hack ‘n’ slash – carrying out melee combos familiar to players of DMC and Darksiders, or even MMOs like TERA and The Elder Scrolls Online.

He’s complemented by Ariet – a more recent creation designed to showcase the Lovecraft-inspired lore in Waynick and friend Joseph Marin’s sci-fi setting. A bow and magic-user, Ariet requires players to master aiming and kiting, as well as avoidance. Think third-person shooting with spectral arrows and the help of a pet.

“Our major goal is to balance these two combat styles so they are both fun to play in the same types of maps with mostly the same enemies,” said Waynick. “Learn your combos, spells, and skills, yes, but more importantly: learn to dodge.” 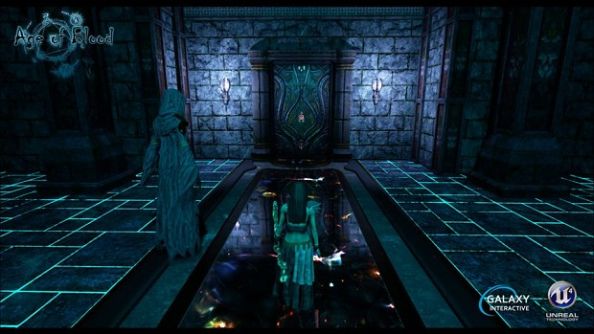 The world they’ll carve a path through will take its pacing and puzzles from God of War and Darksiders, and Zelda before them. But its stone-and-steel look comes from a gritty and Giger-esque place somewhere in Waynick’s unconscious.

“Many of the statues were unplanned without concepts,” he said. “I just brought a cube into ZBrush, put on a Lovecraft audiobook, and started randomly sculpting until I got something sufficiently creepy.”

Age of Blood began life as a UDK map in Waynick’s post-university environment art portfolio, but didn’t stay that way for long. Waynick talked to Marin about what kind of game he imagined it might be – and before he knew it, his friend had bare bones melee combat working in the map.

The pair worked in UDK for over a year, assembling characters, puzzles and a team of fellow developers to work on everything from art to music. They were halfway there, they thought – but were engaged in an ongoing fight with the engine and their own inexperience. 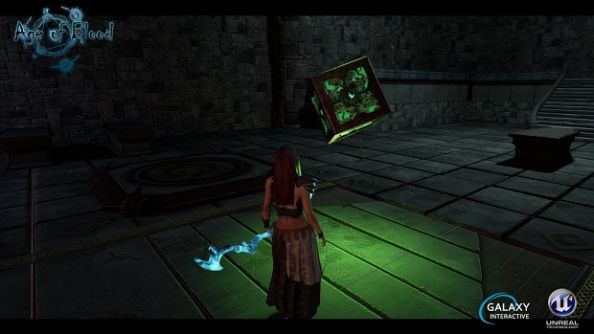 “Being fresh out of college, we learned a lot about the game development pipeline and all of the headaches that come along with it,” said Waynick.

They needed a technical hand. Once the UE4 beta came around, Waynick did “everything short of selling a kidney” to get into it. After wrestling with the new tools, he contacted Epic in the last week of December to ask for second slot on the program – and sent Marin his own beta confirmation in a Christmas card.

The two lead developers made a deal: only if they could rebuild the first three rooms of one of their maps in two weeks – puzzles, mechanics and all – would they move over to UE4.

“It took us three days to slaughter that challenge and we kept going,” said Waynick. “At the end of those two weeks, we had a decent portion of the first map built and playable. We switched our entire development over to Unreal Engine 4.” 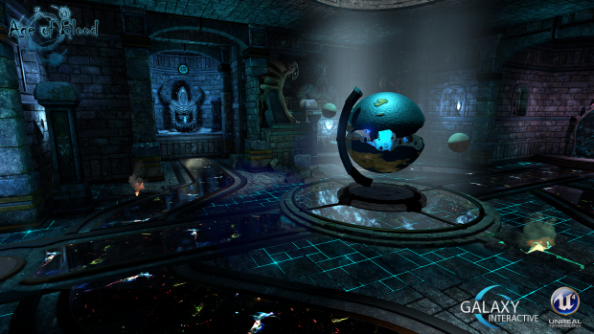 The game Waynick and Marin first envisioned had changed in size and shape to fit Galaxy’s budget. But the new engine let them test the boundaries of their mechanics, and allowed them to implement ideas they’d “tried at failed at many times” in UDK.

“There have been cuts and there have been additions, but I think the game as a whole is all the better for it,” said Waynick. “There are things that we have accomplished that we never imagined we would have.”

UE4 has a scripting provision for inexperienced programmers named Blueprint – and Waynick found it made UE3’s Kismet system look “like kindergarten finger painting” by comparison. He’s been able to expand on his art assets by giving them functions; entire rooms and puzzles in Age of Blood are built with Blueprint.

Here’s an example: the designers might want a door to be controlled by a switch, that in turn requires a gem of a particular element to activate. Galaxy can drop all three objects into the level, select the correct element using a custom dropdown box, and then connect up the switch’s ‘color picker’ with the door. Done. 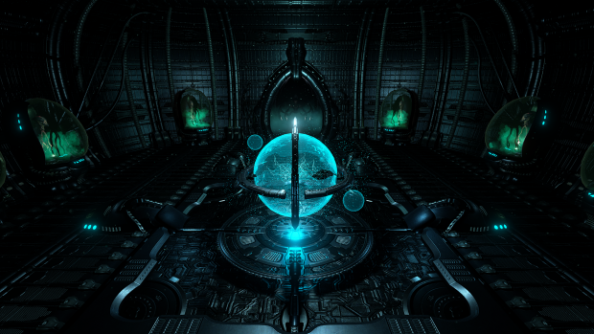 “You have a simple puzzle that took the level designer less than 30 seconds to set up – all because this functionality was preprogrammed into the individual Blueprints,” said Waynick. “I would say Blueprint has revolutionized the way we make games.”

Fifteen months after starting the fight anew with Unreal Engine 4, with every penny of their budget sourced from personal funds, Galaxy are proud of where they’ve wound up with Age of Blood.

“While there is still a lot of development to be done before release, we’re happy with how far it has come,” said Waynick. “Switching to UE4 meant largely starting from scratch, but that wasn’t really a bad thing. We have learned a lot in our respective disciplines and could do everything we do better at this point. More efficiently.”

Asked what he’s most proud of in Age of Blood’s tech, Waynick names a console favourite now at home on PC: ledge-grabbing. 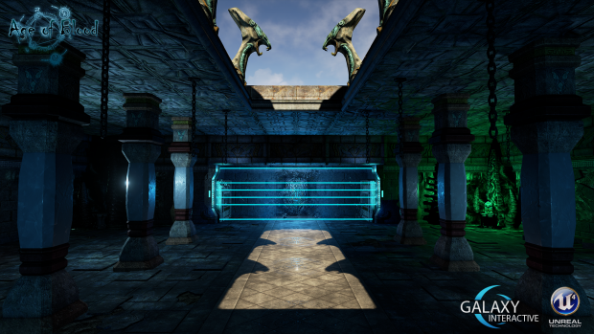 “We were trying to get that to work for a couple of years in UDK across a couple of different game projects and never could get it as flawless as we like,” he said. “Now, I waste so much time jumping from ledge to ledge with a smile in my soul.”

Age of Blood has been Greenlit on Steam, and work on the game is ongoing. Unreal Engine 4 development is available to anyone for $19 monthly subscription fee.

In this sponsored series, we’re looking at how game developers are taking advantage of Unreal Engine 4 to create a new generation of PC games. With thanks to Epic Games and Galaxy Interactive.