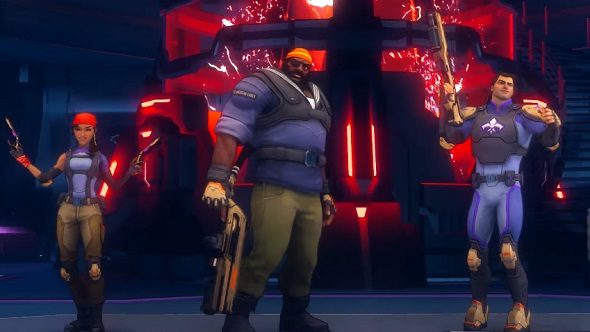 In a bombastic trailer, developer Volition have revealed the first three playable agents for open world adventure game, Agents of Mayhem. Named the Franchise Force, this first group of characters include a Colombian sky pirate, a former adult film actor and an one-eyed US Navy officer.

Find more open world to go wild in with our list of the PC’s best sandbox games.

An “ostentatious showboater” according to the trailer’s voiceover, the reality star turned secret agent Hollywood loves to turn everything into a spectacle. Wielding an assault rifle with a under-barrel grenade launcher, Hollywood likes knee sliding into the thick of battle, blowing up all enemies and then taking a selfie of the smoking debris.

For those looking for a bit more mobility, the sky pirate Fortune may be for you. A master of her dual pistols, Fortune can double jump across rooftops to lay down fire on Legion soldiers. Her drone G.L.O.R.Y is great for crowd control, as Fortune can order it to electrocute any enemies who dare to stand close.

As for those wanting to really do some damage, Hardtack is your guy. Much like another one-eyed demolitions expert, this Navy officer can throw sticky grenades which attach to enemies and cause a mighty explosion once detonated. He can summon energy bubbles to encase foes, allowing him to swat them into the stratosphere with his giant harpoon or shotgun.

Each agent comes with their own super ability, with Hollywood firing out a grenade the size of a giant bowling ball, Fortune causing her drone to unleash a mini-lighting storm and Hardtack demolishing anything in his path like the Hulk running for the loo. You can quick-swap between these agents at will, allowing players to chain abilities together to cause untold havoc. With Agents of Mayhem promising 12 playable agents on release, missions will get hectic rather quickly.