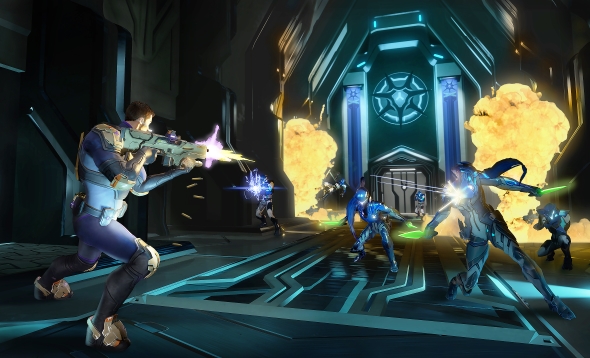 Volition announced last year that their new game is Agents of Mayhem, but a new leaked trailer has revealed that the game will be released in August, and will merrily continue the absurdist tone established in the Saints Row games.

Cause chaos right now in our favourite PC sandbox games.

The comic book-style spin-off exists in the same world as Saints Row (which, in turn, is sort of a Red Faction spin-off, thanks to Ultor being the big bad corporation), and shares the bright purple colour-palette and pop-culture references of that series. This trailer alone references 1980s gems The A-Team and Knight Rider, as well as featuring a general ‘Saturday morning’ feel akin to the cartoons of the era. This is GI Joe, Volition style.

Aside from cars driving through skyscrapers, superpowers, and a gang of anti-heroes causing the titular mayhem, the trailer also reveals a release window: August 2017. Expect E3 to be the place where Volition and publisher Deep Silver show much more of Agents of Mayhem, since aside from the reveal trailer and this one, we’ve not really seen much of the game.

The Saints Row games generally have a good rep, and it seems like Agents of Mayhem will provide more of the same kinds of gags and open-world chaos, just minus Johnny Gat. Does the change is focus from gangsters to Suicide Squad-alike heroes appeal to you?