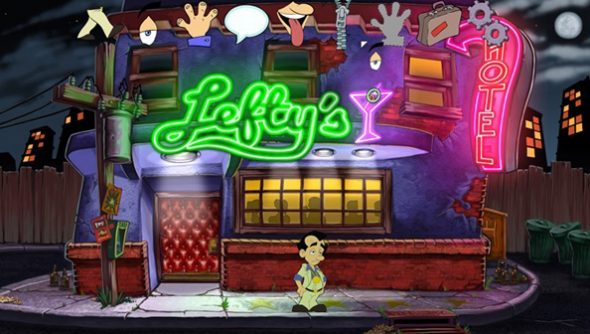 For Lowe, now reunited with the character thanks to Kickstarter, Larry’s rough decade has been unbearable to watch.

“It was like getting a video from your son’s kidnappers,” he said. “On the one hand you’re glad he’s still alive, but oh shit what’ve they done to him?”

“The difficulty in that character and in those new games was in creating a guy who was an obvious loser but by the end of the game you cared if he lived or died or succeeded or failed and that’s a difficult road to balance,” Lowe told us at E3.

“The other dynamic that was hard to balance was to have a game where the man was always the weak side of the equation and the women are always the more powerful enemies, and that’s unusual for videogames too.”

Lowe attributes much of the series’ original success to these unique qualities: “It was a different pig,” he said.

Leisure Suit Larry: Reloaded is an HD remake of 1987’s Land of the Lounge Lizards, directed by Lowe and developed by Replay Games. Originally scheduled for December last year, it was delayed until late June to better make use of its Kickstarter coffers. Will you be coughing up for Larry’s resurrection at the end of the month?