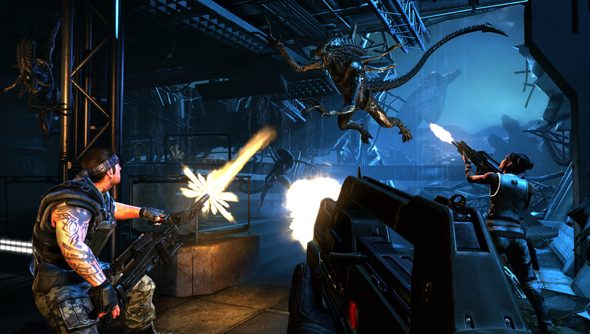 What’s more frightening than just a single, murderous alien haunting your spaceship and jumping out from behind your shower curtains? Hundreds of aliens, that’s what. Aliens running up and down the walls, dropping from the ceilings, peeking their heads out of dustbins and getting stuck in doggy doors. Whether or not you agree that more is necessarily better, you’ll shoot about four hundred xenomorphs in the very first mission of Aliens: Colonial Marines, because the aliens here are unrelenting, swarming chitinous shooter-fodder. Do you like the iconic sound the pulse rifle makes as it shreds through ammunition? By the end of this game’s first mission, you won’t.

Colonial Marines’s many-alienedness brings about carnage ina bold and deliberate step away from the clunking suspense of the Aliens vs Predator series and towards something more action-centric. That’s probably no bad thing if you’re tired of being spooked by alien tail-shaped bits of dangling piping, however. Xenomorphs have been so thoroughly explored as a boogie monster that they’re overdue an appearance more in keeping with that of Starship Trooper bugs. Colonial Marines would make an excellent Starship Trooper game.

All this noise and blood makes a lot more sense in co-op. The main campaign supports four way, drop in-and-out multiplayer throughout. In the hands-off presentation of the opening section of the game we saw four marines jabbing about the abandoned Sulaco ship, investigating the missing crew and inadvertently uncovering an extensive alien nest in the process. Xenos act as you’d expect, skittering in 360 degrees along walls and ceilings as marines shout and attempt to track and swat them. Acid blood dissuades close-quarters combat, while the enemy could be seen to use available surfaces to flank and pop up behind players. The ship itself is a giddying slideshow of half-remembered film sets, familiar rooms and furniture.
Pulse rifles, shotguns and grenades were all utilised to defend choke points as one player attempted to burn through sealed doors in an effort to reach extraction in the Sulaco’s hangar bay. More shouting, more pointing at aliens, some scripted monsters crawled across the thick glass between the bay control room and the hangar itself before the airlock was blown and the horde of xenos was ejected into space. Fade to a score screen where the player was rewarded with a unique weapon and, weirdly enough, a new head. The head can be used to customise your character in co-op. Heads! The hands-on portion of the presentation continued with the Marines’ successful extraction from the Sulaco, which saw the giantship crash into LV-426 right next to the planet’s only point of interest, the crippled and irradiatedremains of Hadley’s Hope, where xenomorphs have mutated into acid-spitting Spitters and grotesequely fattened andtumour-riddled Boilers. From here, Colonial Marines races through a checklist of Alien game musts: your motion sensor can only be used when your weapons are holstered, there’s a period of relative calm in which you’re placing motion trackers on walls, which rapidlydescends into gunfire and chaos, you stomp down a corridor with an over-poweredsmart-gun, you throw downan automated sentry to fortify the medical bay, offline systems must be brought online by wandering through sewers in search of the future’s equivalent of afuse box.

What Colonial Marines does it does very well, but it’s far from rocking the franchise’s boat. The game comes witha massive pair of boat stabilisers attached, ensuring that, at least in the opening couple of missions, the boat remains entirely level. Multiplayer, on t’other hand, is a different beast. Colonial Marines plays host to a Left 4 Dead style game mode called Escape, in which a team of four Marines must make their way from one corner the map to the next, stopping to hack doors and wait around while elevators are called. Four player controlled aliens come in three different classes, each with their own set of skills. Some can pounce and pick off straggling or wandering Marines, some can lash with their tails, one-hit killing their enemies, and otherscan launch volleys of acid spit at varying velocities. As a Spitter, it’s even possible to hold down the spit key long enough to eject a railgun-force loogie.

Aliens, much like Left 4 Dead’s special infected, are able to see surviving Marines and their health status through walls, no matter their location on the map. Marines, meanwhile, are differentiated by their weapon loadouts. Their game involves moving in a huddled group through corridors before reaching one of the map’schoke points: a door that must be opened, a ship that must be summoned and so on,that sort of Marine-grade business. Sentry turrets can be placed, most usefully at these choke points, to help fend off alien attacks. Carrying the sentry turns you into a waddling duck however, rendering you incapable of using your own weapon and slowing your movement speed drastically. Co-operation and co-ordinationis required to maintain an effective defence on your path to each map’sdenouement: a Left 4 Dead style stand-off in which Marines must hold position for a number of minutes before they can safely claim a victory. The Extermination game mode is less about travelling and more about capturing control points. In the map we played, Marines had to plant bombs around nests of alien eggs, while the aliens, as is their wont, attempted to prevent this from happening. It’s possible for one player to be selected to temporarily become the super-powered Boiler alien (another nod to Left 4 Dead here, this time to that game’s hulking Tank). This irradiated fellow can eviscerate whole squads of Marines, before eventually exploding in a cascading shower of glowing green gloop. Throughout this game mode, it’s worth mentioning, the Marines made some remarkable egg puns. Especially given the gravity of their mission.

Weirdly enough, controlling the aliens ismore disorientating than the last time xenomorph controls were handed to us, back in 2010with Rebellion’s Aliens vs Predator. That gamecame close to nailing it, maintaining a first person view as you held a key to stick to walls and ceilings, while never changing the axes of mouse control. It was dizzying at first, but itmade sense. Colonial Marines is different however, you press a key while butting up against a surface to initiate the move from a floor to a wall, or a wall to aceiling.Once you’re off the floor, it’s not necessary to hold any keys. The camera then pulls out from a firstto a third person perspective, showing your character either clinging to the side of a room or upside down, rather than re-orientating the camera. That is to say that’up’ is always ‘up’ on your screen, while it’s your character who inverts. It’s a solution that, on paper, would seem to be less nauseating than the spinning, cavorting camera angles of other Alien games, but in practice it’s difficult to know in which direction your suspended alien will skitter when you begin to move. My plucky alien would often find himself jammed in bits of scenery too, especially around the scaffold-heavy landing pad near the mission’s end.There’s almost certainly a knack to controlling Colonial Marines’ aliens, but theconstant switching between viewpoints also gives unwelcomespecial status to walls and ceilings that shouldn’t exist for the omni-directional, surface-agnostic xenomorph. That’s sort oftheir thing.

Colonial Marines launches in February next year, which doesn’t give Gearbox all that much time to extricate their hundreds of aliens from the scaffolding surrounding the beleaguered Hadley’s Hope. The single player campaignspeaks to a strange audience, one that’s immersed enough in the universe to recognise and appreciate how Gearbox haveexpertly recreated locations and materials from the films, but one that hasn’t yet tired of unremarkable plot devices, schlocky alien frights and tired military gruntarchetypes.

The multiplayer is absolutely where the game’s flare lies, withco-operative play in both campaign and Escape modesshowing promise. Not only isLeft 4 Dead with xenos is one of the greatest elevator pitches you could ever hope to hear, it totallyjustifies a deafeningplurality of aliens.