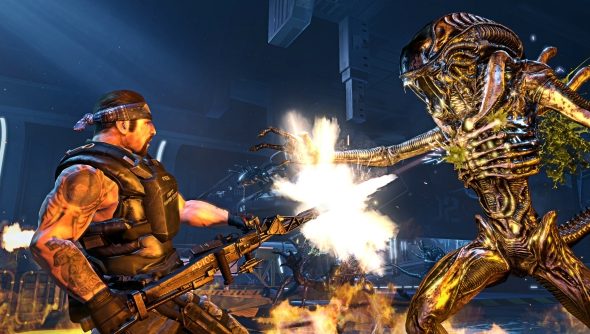 From what we’ve seen, the aliens in Aliens: Colonial Marines already look lovely. Well, as lovely as eight foot drooling carnivorous psychopathic extraterrestrials can. But in the PC version of the game they might look even lovelier – if it’s got DirectX 11 effects.

Gearbox’s Brian Burleson, producer of the upcoming game, spoke to us at a recent event, and said that additional DirectX 11 effects might be in store of PC gamers. “It doesn’t have any special DX11 features at the moment, but it will run in DX11″, he said.
Burleson also said that the game will support Steamworks, so there will be none of the Games for Windows shenanigans that made Aliens vs. Predator a more terrifying prospect than the beasts within. Your console-based friends won’t “accidentally” spoil the game for you, too: the PC version will be released at the same time as the console edition.
Aliens: Colonial Marines (I just mistyped that as Aliens: Conical Marines, which would be a very different game) has been a long time coming. Rumour was that the developers were waiting for the release of Alien prequel Prometheus before putting the game out. Not so, according to Burleson. “We announced the game before we started working on it, so a lot of people are surprised at how long it’s taking.”
Colonial (Conical) Marines (Matrons) will be released next year, which will definitely give Burleson and his team enough time to stick all those preciousDirectX 11 effects in.