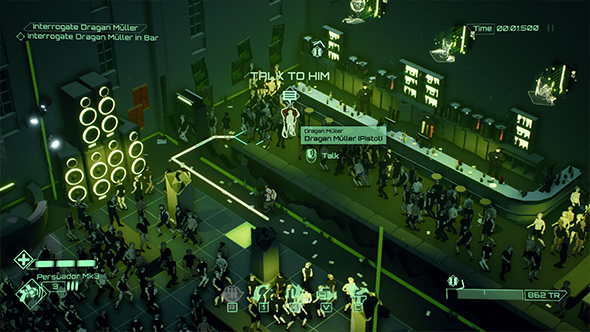 All Walls Must Fall is strategy game from some of the former makers of Spec Ops: The Line, which draws on the likes of XCOM and Syndicate to depict a futuristic techno-tactical Cold War. After launching in Early Access back in August, it’s now ready for prime time, and has just seen the release of version 1.0.

Set in Berlin circa 2089, it’s an alternate future in which the wall separating East and West never fell. You a group of time-travelling secret agents out to save the world from a nuclear strike over the course of a night in the city’s clubs. You take control with a pausable real-time command system, exploring procedurally generated stages and taking advantage of time manipulation abilities to carry out your shadowy work.

With a club-heavy setting there’s a big focus on the soundtrack, with tracks from artists who’ve contributed to Nuclear Throne, Luftrausesrs, FTL, and more. The 1.0 update brings new tracks, in addition to expanded endgame content, more diverse club visuals, improvements to the HUD, plus performance improvements and bug fixes.

Original story June 26, 2017:All Walls Must Fall, the game that’ll have you play a time-travelling special agent sent into the past to prevent the Cold War from turninghot,will be coming to Steam Early Access on August 8.

The Early Access build is the game’s first act, though as a roguelike, you can replay those missions with a lot of variation.

Set in 2089, All Walls Must Fall takes place in a world where the Cold War never ended. On New Year’s Eve, a nuclear bomb goes off in Germany, turning this unusually long Cold War hot. You’re part of a team of time-travelling special agents sent back to before the bomb went off, on a mission to track down who unleashes the weapon, and to stop it from happening.

Developers Inbetween Games say there will be monthly updates to the Early Access build, adding new features, fixing bugs, and growing the game.