As is tradition in this most festive month of the year, AMD has released a new driver package heaped with features and updated functionality for Radeon graphics cards. The Adrenalin 2019 Edition comes with pages upon pages of updates – everything from granular WattMan controls to voice commands. Yep, you can now talk to your graphics card with the latest Radeon Software update.

The software side of Radeon has been riding high after news broke mid-year that its graphics drivers were the bees knees, so to say. AMD Radeon Software was rated the most stable industry drivers by a third-party consultancy (which AMD commissioned), batting away years of anecdotal evidence otherwise. And it hopes to keep that momentum going into the title fight in 2019.

There is a lot to the latest Adrenalin 2019 update that might have some genuine use for amateurs and enthusiasts alike, a mix of small tweaks to the original Adrenalin formula and grander updates. And we’re told a lot of it was requested by you, the gamers that took to AMD’s feedback form.

The most demanded update according to the user feedback, for example, was refined performance metrics in the overlay. So that’s in the latest package – aren’t you all lucky? 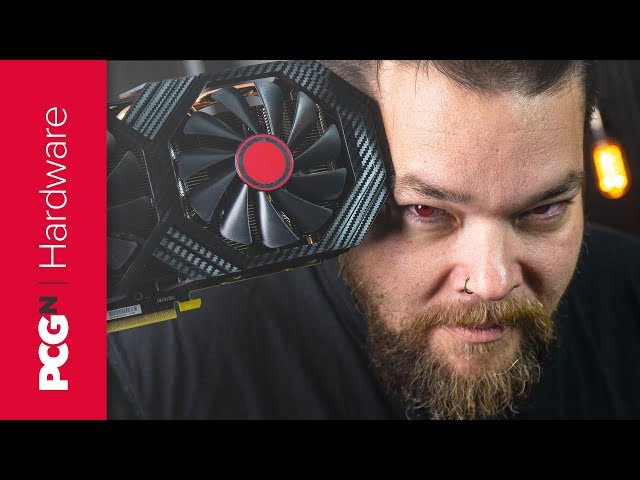 But rather than list every new feature in the package – you can see all that here – we’ve picked the three most important new AMD Adrenalin features you might want to try out for yourself. 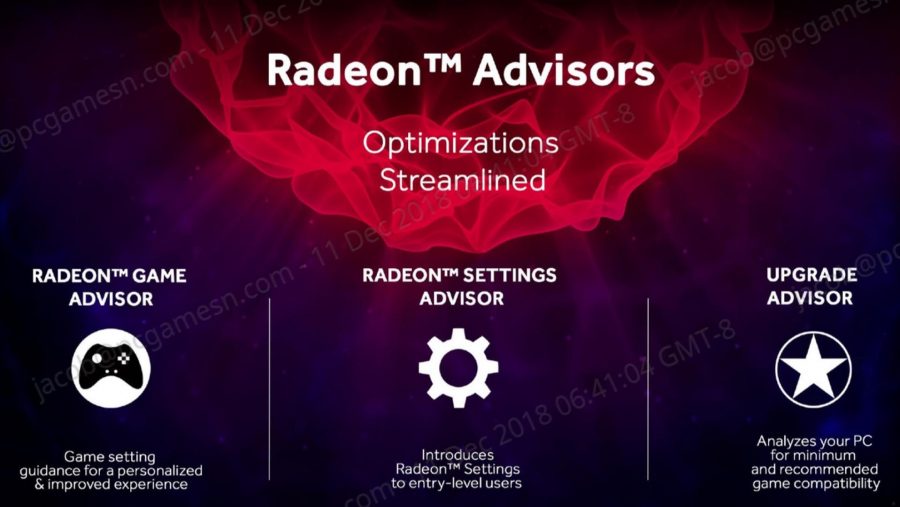 One of the issues bugging AMD’s top software heads is how to get more people to actually use the functionality the company is building into the Radeon package. Gamers might now be convinced to download the latest driver packages on launch day for the best performance, but that doesn’t necessarily equate to anyone actually utilising all the advanced features hidden behind the menus.

It might all seem simple to some, but AMD isn’t assuming any prior knowledge. Advisors are, after all, intended to remove any prerequisite knowledge, and maybe teach a little along the way. 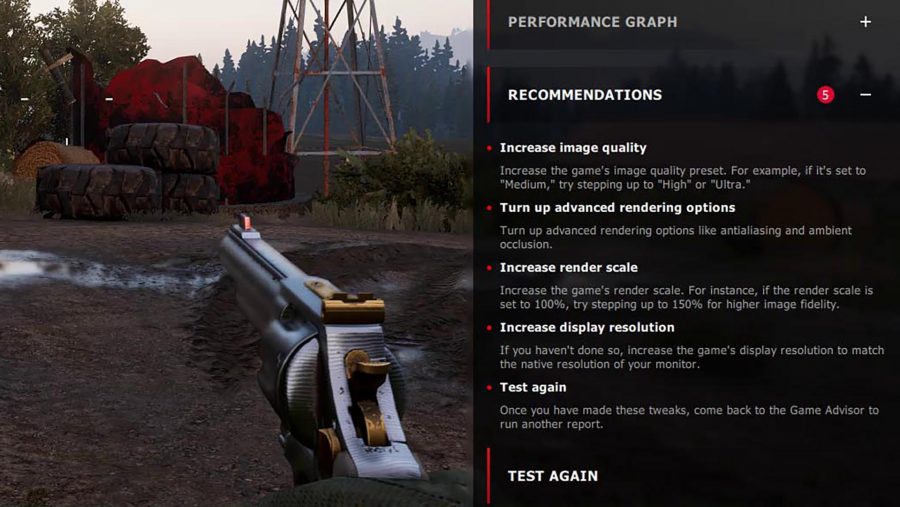 For starters, let’s delve into the Game Advisor. Built into the overlay functionality (by default set to ALT+R), this feature monitors performance for a brief period and recommends suggestions and optimisations depending on your system setup.

After 90 seconds of monitoring, the system will display average frame rates, 95th percentile, performance graphs, and a list of potential system setup changes you could make within a ‘performance report’. Open the report and you’ll see suggestions such as decrease image quality, turn down ambient occlusion, or change your resolution. 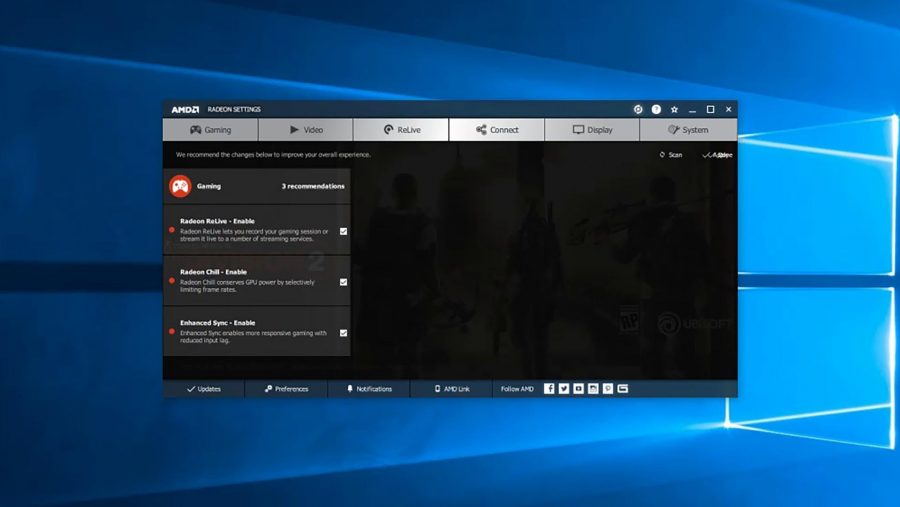 Now settings advisor is a similar beast. However, this feature focuses on the dusty Radeon settings lying dormant in your drivers. Radeon Settings Advisor runs from within the Radeon driver window, and will output system recommendations such as Radeon FreeSync, Virtual Super Resolution, Enhanced Sync, and Radeon Chill.

After a quick system scan, the system will return a handful of features for you to enable or disable as you see fit. 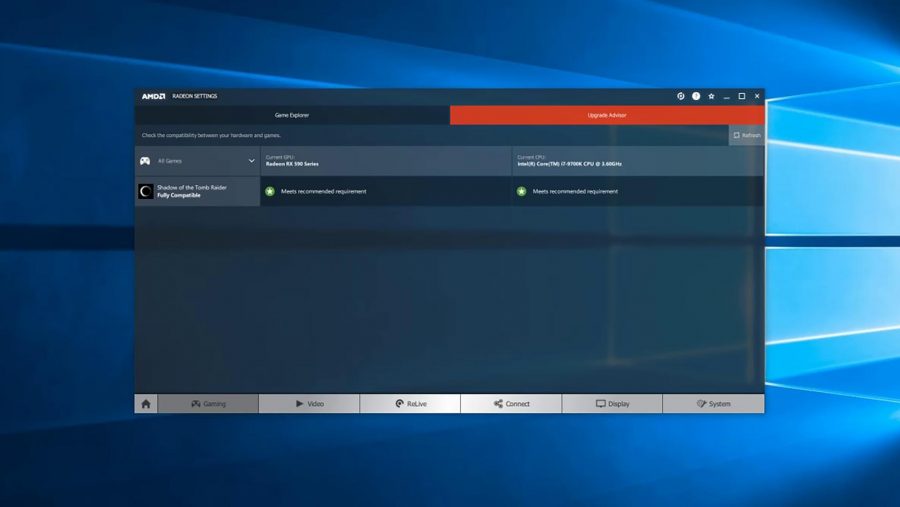 Lastly, the Upgrade Advisor. This adds functionality to the Game Manager from past driver versions, offering guidance on minimum and recommended specs lists.

Not only will it inform you whether your system meets the requirements for games within your library, but it also offers guidance on potential GPU/CPU upgrades to meet those requirements. Red team only, of course. 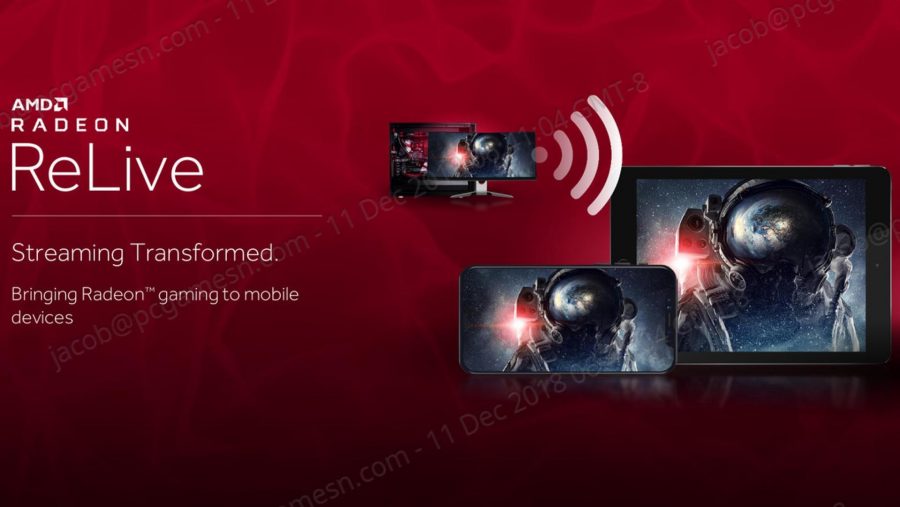 AMD Link is the mobile companion app that connects directly to your PC’s drivers, and, therefore, as close to the metal as you can get away from your desk. This was introduced back with the first Adrenalin update, but after a year of feedback there are some big changes to how the app works and what it’s capable of.

Aside from changes to the utility and ease of use, one of the most notable upgrades is the inclusion of Game Streaming. Rather than settle for third-party options, or those solutions limited to particular game libraries, AMD has rolled out its own Android and iOS home streaming solution through the AMD Link app.

While potentially capable of up to 4K60 gaming, bitrate and quality are set by the system on startup to best suit the connection in use. Ideally, a 5GHz one. User settings for both resolution and bitrate, along with stream metrics, audio bitrates, host PC settings, controller layout and connection options, and frame rates, are all accessible through the user interface, too.

And that’s all bootable hands-free. All you have to do is shout ‘Radeon start streaming’ at your phone and you’re away. There are actually a whole heap of voice commands for the AMD Link app, all prefixed with ‘Radeon’, in both English and Chinese (either dialect). Of course, some phrases more useful than others…

AMD also supposedly has you covered whether you say rad-eon or ray-deon, but unfortunately refused to clarify which was the correct pronunciation once and for all. We all know which is correct though… right gang? Feel free to hash that one out in the comments. 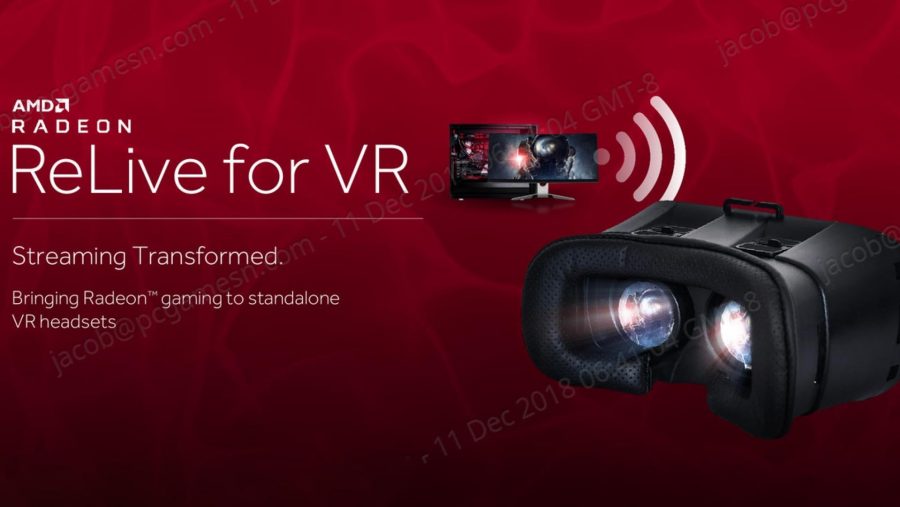 Radeon ReLive for VR is more akin to game streaming than it is to the ReLive capture software. This functionality allows you to stream your SteamVR compatible titles from your home PC over to a standalone wireless headset.

HTC Vive Focus, Oculus Go, Samsung Gear VR, and Google Daydream-compatible headsets are first up on the roster. All you need is to install the ReLive VR app on your headset or phone through the appropriate app store, switch on Remote Play and SteamVR integration within the Radeon settings, and run the app.

Of course, there are some limitations. And mostly on the controller front. Most standalone headsets don’t offer six degrees of freedom controls, which will limit compatibility with a significant amount of titles currently playable on SteamVR. You can, however, ditch motion controls altogether and instead opt for a third party gamepad – pending in-game support.

Aside from the features above and some quality-of-life upgrades to algorithms such as Radeon Chill, the package also holds a few optimisations for Assassin’s Creed: Origins, Shadow of the Tomb Raider, DOOM, Wolfenstein II: The New Colossus, and Strange Brigade.

But rather than focus on current package updates, AMD highlights improvements between drivers year-over-year within its press materials: comparing this driver release to the Adrenalin package 17.12.1 of December last year. The numbers at least make for an interesting snapshot on the difference a year’s worth of driver tinkering can make.

For example, Call of Duty: World War II performs roughly seven percent better with the latest drivers over the initial Adrenalin package. Meanwhile, Far Cry 5 performance increased two frames, and Deus Ex: Mankind Divided actually lost a frame over the year. For the most part, performance is on the up.

And ideally performance will be on a steady incline all the way through 2019. The red team will need its drivers on point if it hopes to stick it to Nvidia with the AMD Navi, expected to make waves in the mainstream market sometime mid-year.