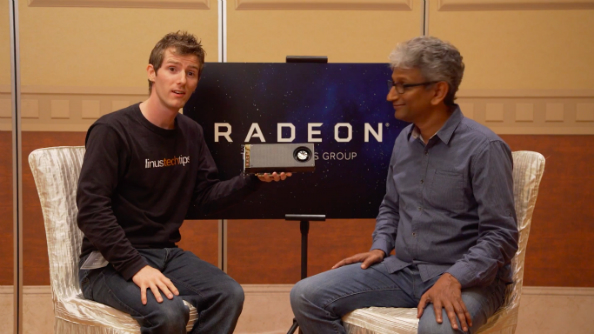 Into virtual reality? Check out the best VR games available on PC, aka the excuses you justified that mega GPU purchase with.

Following that video (below), AMD have released further details on the R9 480X and they paint a clear picture that they’re not trying to compete directly with Nvidia for performance terms. Instead, in a strategy that mirrors the last generation, they’re going after the mainstream market at a lower price point.

The RX 480 will power what Koduri calls “good VR” – Oculus Rift and HTC Vive experiences that have thus far required a pretty expensive PC to run at a frame rate that won’t boil your grey matter. It’s a $200 VR card.

Further details reveal more about where it sits in relation to AMD and Nvidia’s other cards. This leaked internal slide cites a 5.5TFLOPS performance output and 8GB GDDR5. That’s a low floating point performance than both Nvidia’s Pascal GPUs, but slightly higher than the GTX 970.

Meanwhile over at PC Gamer, they have info on possible 4/8GB models, and suggest there’ll be slight price difference (around $40) between the two.

The full specs will no doubt be released via the official channels in the coming days, so we’ll update when things are clearer. It’s looking fairly certain that the RX 480 will release imminently though, this month. That’ll create an interesting dilemma for people who were considering investing in a GTX 1070 when it’s released on June 10.