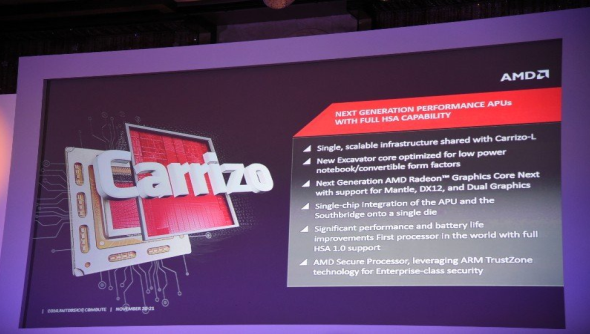 AMD announced a new line of APUs at their their Future of Compute event in Singapore, the Carrizo. The hardware’s been optimised for low power usage, making it perfect for powering laptops.

The Carrizo chip acts as both a CPU and GPU upping the possibilities of what your laptop can run.

AMD say that the Carrizo chip will run Mantle, DX12, and Dual Graphics. This means that it’s set to take advantage of EA’s Frostbite powered games, CryEngine games, and the next release of Windows.

AMD claim that the new chip will reduce power consumption by 10 – 20% for the same performance.

The Carrizo comes in the wake of Nvidia’s Maxwell chips which proved to be the most efficient GPU chips on the market, requiring significantly less power than AMD’s equivalent.

AMD also announced a partnership with Samsung who will make sure all their monitors from 2015 will support AMD’s Freesync technology standard. Freesync reduces screen tearing, while playing games. Nvidia have their own tech for reducing screentearing, GSync, but you need to buy an additional piece of hardware to fit to your monitor for it to work.

Expect more announcements through the week as Future of Compute continues.