Rumours have appeared online that the next-generation architecture after AMD’s upcoming Navi may be ditching GCN cores altogether. This speculation has also led to questions regarding Navi’s direction, and what to expect from the upcoming and not-too-distant graphics card generations from the red team.

Recent rumours have been speculating that post-Navi will see the end of AMD’s geriatric Graphics Core Next (GCN) architecture – which has been struggling somewhat to scale alongside the competition. AMD’s upcoming Navi architecture will be built on a new iteration of the GCN architecture, although potentially utilising multiple GPU cores sewn together with some variant of AMD’s Infinity Fabric to counterbalance the ageing GCN design.

Want to push your ageing graphics card a little further? Here is our how to overclock guide.

Tweaktown attempted to reach out for confirmation on the rumours, and while they received no clarification on the matter of the GCN architecture being booted out the door, they did hear that supposedly the AMD Navi architecture development wasn’t going too well, being “just as bad” as Vega, and that AMD’s RTG team have very little direction going forward. If true, this is a somewhat expected symptom of ex-RTG chief Raja Koduri’s untimely departure to Intel.

According to Tweaktown’s unnamed sources, Navi will be a refined Vega generation and could potentially be a disaster – as they also claim the Vega architecture was itself. It wouldn’t be surprising to see the next-gen architecture – following Navi – ditch the ageing and seemingly unscalable GCN architecture. With RTG under new leadership, it seems like potentially the right time to make the change, however, this all still remains unsubstantiated by AMD so far. 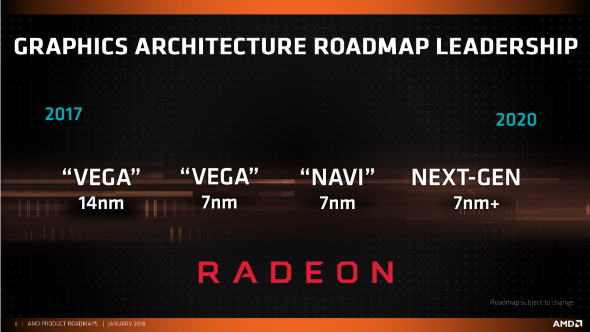 The architecture beyond Navi remains unconfirmed by the red team – only indicated by ‘next-gen’ on roadmaps for around 2020, and that it will arrive on 7nm+. AMD CEO and president Lisa Su confirmed at a pre-CES event that AMD’s leapfrogging design teams are already hard at work on the next-gen architecture, however.

“We continue to make excellent progress on the Navi architecture, and you’ll hear more about Navi as we take that into 7nm.” Su says “And we have another development team that’s already started work on the next-gen graphics in 7nm+.”

“Our Navi design is very exciting, that microarchitecture is going to bring several key improvements. And as well leap-frogging design teams into next-gen with 7nm+ and further performance per Watt enhancements”

Unfortunately, we still have very little indication on the post-Navi generation and these rumours seem entirely speculative so far. It surely is reaching somewhat the end of the road for the GCN design, but when this foundational change will happen is still unknown as of yet. With new leadership in place at RTG, current roadmaps are likely to be subject to considerable changes before they come to pass.