AMD might be prepping a Polaris refresh for immediate release, with the RX 570 and RX 580 both on the docket for an update. The latest rumours suggests the red team has a refreshed Polaris 30 RX 570 replacement, ostensibly an RX 670, ready to launch by the end of the week. An RX 580 replacement, potentially an RX 680, will follow up shortly after in November.

Rumours of a Polaris refresh are nothing new, but they have been few and far between. If AMD has adroitly kept an entire Polaris refresh generation under wraps until the week of launch, it will be nothing short of a miracle in another year of innumerable rumours and leaks. The AMD Navi architecture, on the other hand, has been subject to rumours all year round.

The Polaris 30 refresh would likely be produced on the 12nm process node, which has been the basis for second-gen AMD Ryzen CPUs. As James Prior, senior product manager at AMD, told us back at CES regarding the move to 12nm with Ryzen, “it’s not an area statement, it’s a power efficiency statement. The area is not going to change much, but the ability for us to manipulate the frequency voltage curve has improved.”

The rumours come from Chinese tech site PConline. AMD graphics card partners reportedly told the publication that they are preparing a 2048 stream processor GPU, equivalent to an RX 570, for launch on October 12-15th. Meanwhile, a 2,304 stream processor part, an RX 580 equivalent, would arrive in November. 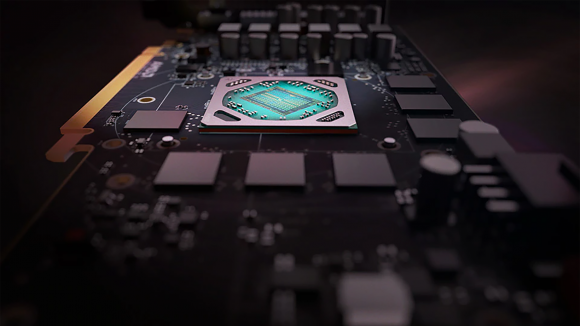 That means the lower spec part would be the first out the door, expected to bring with it increased clock speeds and a moderate performance bump over the previous generation – although no changes to the architecture. We’ve already seen AMD re-brand its current-gen 500-series Polaris GPUs for the OEM market with the ‘X’ suffix, and the lower-spec card launching first could be to similarly appease the OEM giants.

A Polaris refresh at this time could work out for AMD, revitalising a market that is currently dominated by Nvidia’s high-end GPUs. Nvidia is yet to bring its Turing silicon to the mainstream or budget segments, with only the RTX 2080, RTX 2080 Ti, and RTX 2070 announced so far. AMD could clean house with a strong product to compete with Nvidia’s remaining Pascal product, taking it to Nvidia’s GTX 1060 in the lucrative price/performance bracket.

AMD is shifting most of its products away from 12nm next year, moving onto TSMC’s 7nm process node. Lisa Su is expected to talk about AMD’s progression onto the new node, which marks a departure from GlobalFoundries’ manufacturing, at CES 2019 during her keynote speech.

GlobalFoundries recently knocked bowed out of the transistor density fight, with new leadership deciding the move to 7nm was too costly and not worthwhile for further investment. That means 7nm production for AMD’s future Radeon Instinct Vega GPU and Zen 2 CPUs will be built by TSMC.

If the rumours of a brand new Polaris 30 GPU on 12nm ring true – a sight to behold if AMD truly has managed to keep the cat in the bag right up until launch – AMD might have one last GPU generation for GloFo to manufacture before the companies, tangled in a shared history, finally make a break from one another.