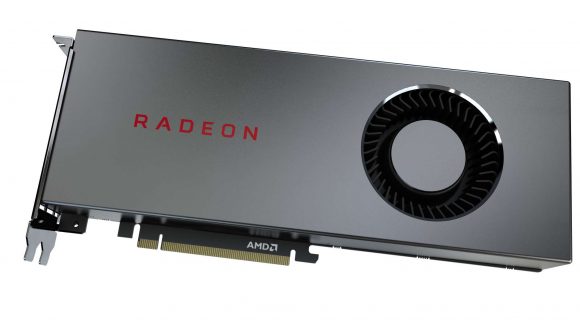 Sapphire has registered 19 new AMD Navi graphics cards SKUs with the Eurasian Economic Commission. In an attempt to cover what appears to be every single potential avenue for AMD’s Radeon nomenclature, the board partner has added provisions for even an eventual ultra high-end RX 5950XT.

There’s nothing to suggest these names represent anything other than placeholders, however. AMD is on the verge of releasing its Radeon RX 5700 XT and RX 5700 – just two cards – and let’s not get too carried away with pipe dreams of a further 19 launching anytime soon. But the entries do offer some insight into how Sapphire – a company that works exclusively with the red team on graphics – could see the AMD RDNA Navi stack expanding going forward.

The RDNA architecture is built from “the ground up for gamers.” It’s set to be utilised across a range of applications, from mobile phones all the way up to the mid- to high-end graphics cards launching on July 7. We’ve only had official word on the 5700-series so far, but with RDNA touted as such a flexible architecture we’re sure to see it replace Polaris all the way down the stack.

Whether that will be with the RX 5500 XT, or RX 5550, as Sapphire is indicating with its latest EEC registration (via Komachi_Ensaka), is yet to be seen.

Read more: These are the best gaming headsets around

But that’s not all from the EEC database today. What looks to be the entirety of Asus, Palit, and Gigabyte’s Nvidia Super and AMD RX 5700-series third-party lineups have also been exposed by Ensaka. There are a few too many cards to list, but it appears like all three manufacturers have complete, all-encompassing product lists for both companies’ cards.

Gigabyte’s AMD lineup is significantly fewer than its Nvidia one. However, Asus looks to be rolling out a heap of cards for both brands, which is a positive omen of Navi’s competitiveness.