The Polaris architecture has been around a few years now, starting with the flagship Polaris 10 GPU within the RX 480, and eventually into the RX 580 with the Polaris 20 GPU. These cards go head-to-head with Nvidia’s GTX 1060 6GB, fighting it out for the volume mid-range market.

But AMD might have a trick up its sleeve: the RX 590. This graphics card made its debut on the web not too long ago, and we’ve also received  tacit confirmation that something is on the way from the red team very soon. This Polaris refresh looks to be AMD’s way of reigniting the competition with Nvidia’s GTX 1060 before the green team has a chance to get a mid-range Turing architecture card out into the market.

The results for a “ Radeon RX 590 Series” were just spotted by VideoCardz over in the official FFXV benchmarking database. Despite rather low expectations for the upcoming Polaris refresh, the RX 590 is hitting an important milestone: it’s seven percent faster than the rival GTX 1060. That’s with the ‘Lite’ preset at 1440p. 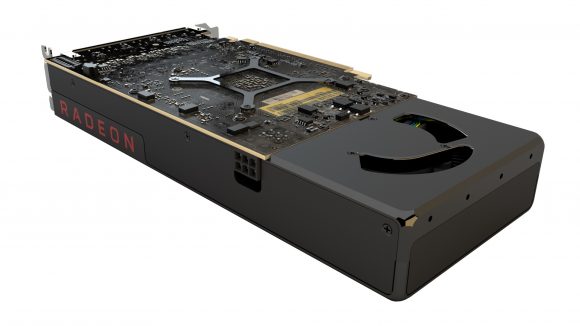 That’s also 10% faster than the RX 580 and five percent under than the RX Vega 56 at this quality setting. When cranked up to ‘High’ 1440p, the RX 590 falls ever-so-slightly behind the full 6GB GTX 1060, however, that’s likely because FFXV cranks up all the Nvidia GameWorks settings it can muster for that particular benchmark run.

Final Fantasy XV is the poster child for Nvidia’s GameWorks graphics suite, and AMD could gain even more ground on Nvidia’s Pascal lineup in games that less-heavily favour the green team’s architecture.

However, do bear in mind that FFXV isn’t well-known for its accuracy amongst benchmarking tools. Considering this card isn’t even confirmed by AMD yet either, it’s best to exercise prudence with your interpretation of these results.

Nvidia (very quietly) announced it will be releasing versions of its GTX 1060 graphics card with 6GB of GDDR5X memory last month. This faster memory standard is the same one found on the high-end Pascal graphics cards, such as the GTX 1080 and GTX 1080 Ti, and could be the green team’s response to AMD’s latest threat.

The exact specs of the RX 590 are not yet in the public domain, so we can’t be certain of the load-out the RX 590 was running at during the benchmark run.

Initial speculation put this card as a 12nm refresh of the 14nm Polaris GPUs, although that’s not guaranteed to be the case – it could be far more pedestrian than that.