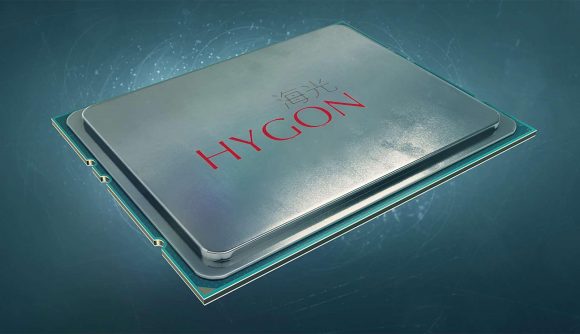 A rare Chinese branded EPYC CPU clone has been spotted on the show floor of Computex 2019. This Hugon Dhyana processor is near enough the same as its first-generation EPYC counterpart, reportedly warranting very few changes to the code, however, it has been tweaked by AMD and its partners ever so slightly to better suit the burgeoning datacentre market in China.

A couple years ago AMD formed a joint venture with various Chinese investors to produce the Tianjin Haiguang Advanced Technology Investment Co. (THATIC), a company devoted to piecing together genuine x86 processors within China. These processors go by the name Hugon Dhyana, and branded under Hygon. Both EPYC and Ryzen lookalikes have been spotted rocking the rebrand.

But pushing genuine x86 processors into the chinese market is no easy feat, nor is bypassing the airtight x86 licensing agreement that AMD must abide by otherwise face the wrath of Intel. In order to do so, the red team and its partners have weaved together a network of subsidiaries, joint ventures, and agreements in order to avoid any litigious actions.

AMD-owned HMC handling production of Hugon Dhyana processors, while THATIC-owned Hygon designs them. The final products can only be sold within China, however, and until now, have remained elusive.

Turn it up: These are the best CPUs for gaming in 2019

But all that manoeuvring has finally resulted in the Hygon EPYC chip first spotted over at Computex by Servethehome (via AnandTech).

These chips are reportedly similar in form and function to their EPYC counterparts, the cryptography engine reportedly the only major discernible difference. The server-grade processors utilise the exact same TR4 socket as their AMD progenitors too, while the few glimpses of smaller, desktop chips indicate an AM4-sized design and soldered BGA connection.

Phoronix reports that the Linux code necessary for Hugon Dhyana processors to operate is almost identical to that of AMD EPYC chips, indicating a similar construction.

With the United States cranking up the pressure on Chinese domestic manufacturing, this partnership could prove invaluable to sustaining China’s domestic datacentre efforts. China has been focusing its efforts on floating domestic semiconductor production for the last few years, which has put pressure on the likes of Intel and other US companies during this period of high tension between the two countries.

But AMD has managed to manoeuvre itself around that blockade, which allows it to continue to pressure Intel and other dominant x86 processor manufacturers in one of the largest PC markets in the world.

And it hasn’t come out of the venture empty-handed, with the deal netting the red team some $293m in much-needed cash back in 2016.

At the moment the deal looks to be limited solely to first-gen Zen microarchitecture processors, and whether or not the JV will later gain the plans for Zen 2 – the architecture at the core of Ryzen 3000 chips – has not yet been confirmed.