AMD has partnered with Cray Inc. to create the world’s fastest supercomputer in 2021. Frontier will come online in 2021 in the US, fitted with AMD EPYC Zen 2 CPUs and Radeon Instinct GPUs. These will total 1.5 exaflops of compute performance, pipping the Intel Xe-powered Aurora system announced earlier this year by half a big ol’ flop.

The contract is valued at a little over $600 million, and Cray will be taking care of the server infrastructure and providing its Shasta and Slingshot supercomputer technologies. That’s quite a task in itself, as the machine will necessitate 90 miles of wiring within its 7,300 sq. ft footprint. It will be up to the red team to deliver on the system’s compute-friendly silicon. And it’s bringing its best.

AMD will be fitting Frontier with custom AMD EPYC CPUs built upon “future Zen Core high-performance architecture”. Certainly Zen 2. Each CPU will be packaged into a single node alongside four custom Radeon Instinct GPUs, each fitted with high-bandwidth memory. Each node will be weaved together using the company’s Infinity Fabric interconnect.

AMD is touting massive AI power with the machine, a key focus of many modern-day supercomputers.

Stillprettygoodcomputers: These are the best CPUs for gaming

The machine will be delivered to the Oak Ridge National Laboratory (ORNL) in 2021 for roll-out at the Department of Energy’s discretion. The general uses for this supercomputer will include simulating weather, modelling subatomic structures, and prying deeper into humanity’s understanding of physics.

“AMD is proud to partner with Cray and ORNL to deliver what is expected to be the world’s most powerful supercomputer,” Forrest Norrod, senior VP and GM of AMD Datacenter and Embedded Systems Group, says. “Frontier will feature custom CPU and GPU technology from AMD and represents the latest achievement on a long list of technology innovations AMD has contributed to the Department of Energy exascale programs.”

This upcoming supercomputer will go online as the world’s fastest at 1.5 exaflops of performance – so long as no one company, or country, has any hidden plans in place for anything better that we aren’t yet aware of. This also means AMD will be trumping Intel’s efforts for the DOE’s Argonne National Laboratory in Chicago. 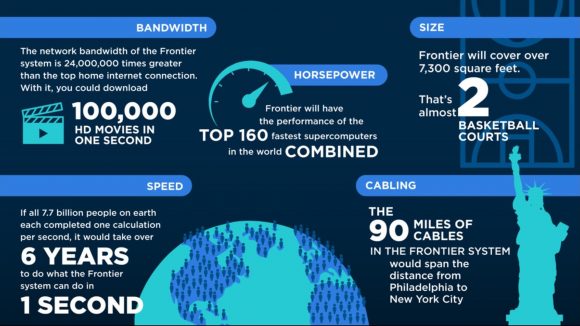 The Intel-powered Aurora supercomputer will be the first to reach exascale performance, although not by all that much. It too is expected to launch in 2021, powered by Intel Xe graphics, Optane memory, and Xeon CPUs. Cray will similarly be contributing its Shasta and Slingshot systems, albeit optimised for Intel’s products.

And if the DOE didn’t have its fingers in enough supercomputer pies already, it also teamed up with Nvidia to build Summit in 2018. This supercomputer is comprised of 27,648 Volta GPUs and was also built to advance research over at ORNL.

Back when the mining craze was afoot, we used some grade-A mathematics to calculate that Nvidia’s supercomputer would be capable of making $2.35m per month in crypto-winnings. That was at pre-mining burst prices, however. We doubt it would be worth footing the energy bill for, nowadays.

But this supercomputer’s power tallied just 200 petaflops, which means the AMD-powered Frontier system will be more powerful than Intel and Nvidia’s systems combined.

If today’s supercomputing scene is anything to go on, Frontier is unlikely to stick in the top-spot as the “world’s fastest” for long. Nevertheless, AMD is certainly making a name for itself competing with Nvidia and Intel’s finest in the HPC and AI compute world.