Code referring to an AMD X590 chipset has been uncovered within X570 BIOS code. Very little is known about this mystery high-end AM4 chipset aside from its name, we don’t even know if it truly exists. But it wouldn’t be out of the ordinary for AMD to copy Intel’s naming schema – in fact, it does that quite a lot. If you look at AMD’s product stack, it has a habit of closing the door to Intel. For example, it recently did just that with X299/X399 and B360/B350.

But what functionality would be unlocked with a high-end board? The X570 is already pretty kitted out for upcoming Ryzen 3000 CPUs, coming equipped with PCIe 4.0, rather massive storage bandwidth, and up to a 16-phase VRM as we’ve seen on some of the particularly beefy boards.

Yet references to an X590 chipset have appeared in various locations. DRAM calculator’s developer first teased the boards on Twitter (that tweet has since been purged), which then led forum users and editorial staff over at ComputerBase to delve a little deeper into the mysterious new chipset. This digging later uncovered a reference to X590 in the BIOS for a Gigabyte X570 motherboard.

It has been speculated that a future X590 motherboard, if such a thing ever exists, could come equipped with up to 24 PCIe 4.0 lanes for increased bandwidth. X570 is currently fitted with 20 PCIe 4.0 lanes, four of which are reserved for the connection to the CPU.

Read more: These are the best AMD gaming motherboards

Thermals are also a consideration. The X570 chipset is built in-house by AMD – the move to PCIe 4.0 drastically increasing the power demands and heat output of the chipset. The current X570 chipset requires cooling for roughly a 12W TDP, hence the fan, yet there’s potential scope for a board that increases I/O at the expense of generating more heat. 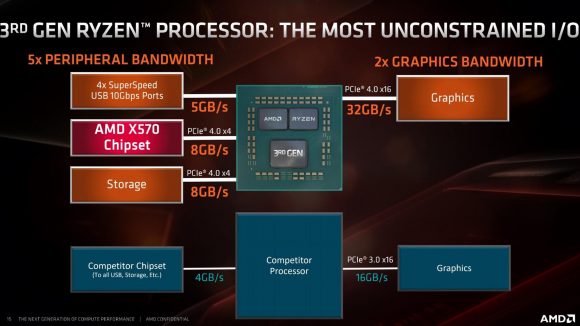 But that’s all just speculation based off little more than a name. AMD could merely be covering itself with an emergency chipset ‘in case of Intel’.

AMD designed the X570 chipset in-house, a departure from the ASMedia collaboration that first- and second-gen Ryzen chips resulted from. Rumour has it that ASMedia will still be responsible for B550 and A520 chipsets, DigiTimes reports, which will forego PCIe 4.0 connectivity in favour of today’s standard, PCIe 3.0.